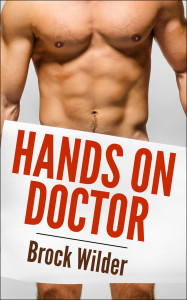 Marina: Just like the last interview, first thing’s first. What are your books and where can we buy them?

Brock: Presently, I have ten gay erotica ebooks available for purchase. All of them can now be seen at my website, http://brockwilder.eroticaauthor.com. The website gives you a description and then links to where each ebook can be purchased.

My latest releases include:

Hands On Doctor, which is about a married doctor that decides to explore gay sex with a few patients, a college football player, and an older friend in a park.

Guys At The Gym follows a gym manager who takes advantage of being surrounded by hot athletic guys all day. In this particular day, he hooks up with a twink in his private shower, a couple in the locker room, and a muscular stud in the back of a storage room.

Obey Your Master is the third ebook in my successful From Work Colleague to Leather Slave series. It’s actually been banned on Amazon due to the content, though they won’t tell me what for. This book follows Mark, who has now been initiated into being a leather slave. In this ebook has him meeting up with four different Leather Masters and obeying their every fetish and kink.

MM: So last time we talked, you had two books out and now you have ten. What have the last eight books taught you?

BW: I’ve learned that your audience wants a new ebook as quickly as you can put them out. I was pretty slow at the start, but most of that was simply fear. I wasn’t sure if I was writing material that people would like. I was worried that people would write to me complaining about a missed comma or something like that. Instead, I just get a lot of messages on Twitter of ‘That totally got me off!” or “I’m so hard now.” and “Can’t wait to buy the next one.”

As well, I’ve joined communities on Reddit like /r/smutwriters that is filled with amazing writers at different stages of the journey. They’re always willing to offer their advice and thoughts on whatever situation you’re dealing with.

MM: With six months under your belt, what do your sales look like? Would you say it’s worth it?

BW: I believe that I’m at a little over 650 books sold between all the different retailers. Through distributing at Smashwords, they can be a few months behind in reporting sales, so that’s not a completely accurate figure at this present moment.

Many erotica writers are trying to do this full time. That’s not my present goal, so it’s worth it for me to be earning some extra income each month. Plus, it’s a lot of fun to have gone from zero ebooks in late December to now ten ebooks only six months later.

MM: What would you say is your best marketing tool?

BW: My best marketing tool has been my Twitter (@dirtysexynaught) account. I think I have a little over 2000 followers right now. I see a lot of erotica writers with less than a hundred followers. I like posting about my ebooks, listing sales that are happening, and just interacting with people. As well, I have a fairly popular tumblr (dirtysexynaught.tumblr.com) too, which is strictly naughty photos that a lot of people enjoy.

MM: Which of your books is your favorite and why?

MM: In our last interview, you said you were hoping to start consulting for aspiring erotica authors, is that happening, and if yes, how can people get in touch with you for this?

BW: I think mentorship is an important aspect of any field. I’ve had over five people from Twitter who have written that they’re interested in exploring erotica, but none have actually put anything out. Another Twitter follower had already released one ebook and I’ve assisted him with marketing it better.

MM: Finally, what would you say is your best moment as a self-published erotica writer?

The best moment is when I check my sales each week and see that people are still buying my ebooks. There’s so much competition out there, so the fact that somebody actually chose mine is really exciting every time.

As well, a lot of erotica authors have stated that they don’t like doing free promotions, as it doesn’t turn into sales in the long run. I’ve had the opposite experience, I ran a free sale and over 450 ebooks were downloaded from Amazon. It was awesome to think that some of these people might read it some day.

MM: Brock, it was a pleasure to interview you. Is there anything you’d like to say that didn’t come up?

BW: Yes, I’d like to offer an exclusive free promotion to your blog readers. Up until June 15, 2014, any of your readers can visit https://www.smashwords.com/books/view/427800, use coupon code: ZZ37N, and then download From Work Colleague to Leather Slave in the ebook format of their choice (.epub, .mobi).

What a guy. So go say hi to Brock on Twitter, at @dirtysexynaught, follow him on Tumblr, and check out his books at http://brockwilder.eroticaauthor.com