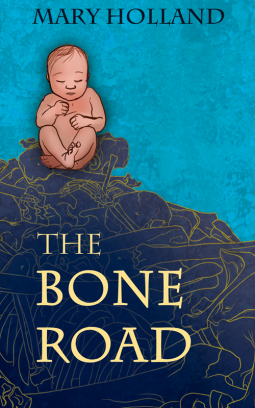 The Bone Road by Mary Holland

This book caught my eye while I was browsing the Recently Added section of NetGalley, even though the publication date is May 1, 2012. It was probably added to the system to maintain interest. The cover was what drew me in, and the classification of science fiction/fantasy and women’s fiction also caught my eye. Not chick lit, “women’s fiction.”

The story also pulled at me. Main character Rhona lives in a world with strict racial divides. Not entirely due to prejudice, although that’s present in abundance as well. In Deo, there are three races: Wid, Zeosil, and Shun. Wid and Zeosil can only have children with each other, or the baby will be born Shun. Shun babies are overwhelmingly likely to die in the womb, at birth, or shortly after, and they sometimes take their mothers with them. If they live, they will be infertile, and/or their pregnancies will never be viable. As a result of their parentage, adult Shun are shunned (gee, I wonder where the author came up with that name!). They aren’t allowed on the Bone Road, the main mode of conveyance around the island continent. Shun frequently face violence, and up until just before the beginning of the book, their ability to own property, work in society, and hold contracts was assumed to be nonexistent.

The twist to this little divide is that almost no one can actually tell a Wid from a Zeosil from a Shun. A very small minority of the population have what’s called the divvy gift; the ability to discern the race and general health of a person just by touching them. Different races wear different colors in order to identify themselves (the glossary says that Wid are blue, Zeosil are red, and Shun are black, but the book itself doesn’t get this specific). Population maintenance is so important to the people of Deo that “paying the child debt” aka producing at least one child to replace you when you go seems to be the main right of adulthood.

The book opens on Rhona’s mother’s death. Her last request is for Rhona go in her place to a woman named Selina who is in danger from the Deo equivalent of the boogeyman. Along the way, our practical, strong, and patient main character manages to defy nearly all the conventions of society, follow her heart, find true love, institute real cultural change, and watch her son grow into the kind of man every woman wants her son to be.

I was completely sucked into this book from word one. I love the characters, especially Rhona, but every single one of the ensemble cast is an example of the best kind of person. I want them all to be my friends. The story itself is totally compelling. I read the last half of the book in a single night. I just couldn’t stop. I read the entire night through. I haven’t done that since high school. I’m not going to spoil it, but there are specific things I thought were really fucking dumb, or even lazy at the beginning of the book that were actually hints as to the nature of the universe, which we get a big reveal about in the last few chapters.

There are some problematic aspects. For example, it took me writing this review to realize that if every person only has to have one child to pay the child debt, the population of this island will be going down and not up. Although there may be a significant number of people who have multiple children, it’s just that we don’t meet that many of them on the kind of adventures Rhona is having.

The fact that every single main character needs to be my real life best friend is also a problem, if you’re looking for one. A lot of people want complex characters, want to feel their flaws and hear their pain, but this really isn’t that kind of book.

This is, perhaps, the main thing that distinguishes The Bone Road as women’s fiction, aside from the multiple female characters who make plot-driving decisions and take decisive action without being seen as rewards or incentives for male characters. The concepts of the novel are all very big-picture. Individual characters and their flaws are never explored because we’re spending our time thinking about society as a whole. The epic-level issues of racial bigotry, civil unrest, and an overall cultural slide towards materialism require epic-level good guys to solve them. The book reminded me, in all the best ways, of the bronze age comics, where real social ills are being examined, but the heroes themselves are all still golden-hearted Gods at the end of the day.

For being extremely well-written, compelling, and uplifting, I give The Bone Road all the stars. For having shit-tons of typos, and being more than a little bit starry-eyed, I give it

For $3.99, you’d be hard pressed to find anything better.

One Reply to “Science Chicktion: Review of The Bone Road by Mary Holland”