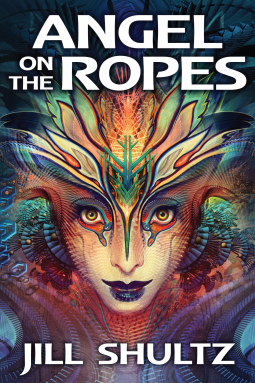 Angel On the Ropes by Jill Shultz

I picked this book because it was published by Broad Universe, who are also responsible for recent fave The Bone Road. Unfortunately I failed to notice, or at least decided to gamble on the fact that they were also responsible with not-so-recent, not-so-fave Narcissus is Dreaming. Like most things I gamble on, it didn’t end well for me. By which I mean it didn’t end at all because I couldn’t finish it.

Main character Amandine is a leopard, a type of spotted human treated like lepers (recognize the naming convention?) by normal humans, who wrongly believe that they carry a dangerous plague.

According to the summary, she operates an underground railroad for her fellow leopards, while being a circus performer, and trying to decide weather or not to trust her girlfriend with the tightly kept secret of her true, leopardy nature. That all sounds crazy awesome.

And yet, it was not.

This may be my fault. I didn’t try to power through. I quit before the first 5% of the book could be read. But this book hit on one of the few elements of poor writing that I can’t possibly stand: poetry.

I am of the (maybe unpopular) opinion that writers should write either poetry or prose. Trying to make every sentence or paragraph in your novel a new lyrical experience for the reader is flashy, exhausting, and covers a lack of true skill. Which is to say that there’s nothing wrong with lacking skill. There is something wrong with trying to hide that fact.

There is also something wrong with more than three straight pages of an acrobatic routine described in the technical language of gymnastics and circus performance. This isn’t Dickens, we all have stuff to do. I don’t know what an arabesque is, and I’m not particularly interested in finding out. Don’t tell me how many she did in a row, tell me how she felt doing them. Tell me about the part of the character, the inside of her that matches mine. That’s what good character work is about, pulling their guts out and making the reader see themselves. Or someone they could have been.

Anyway, the power just went out, so I’m going to sleep. No star rating since I didn’t finish the book.