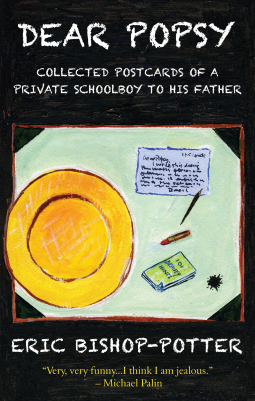 DEAR POPSY: Collected Postcards of a Private Schoolboy to His Father by Eric Bishop-Potter

I got this from NetGalley, and was more than pleased with the newly released Kindle edition of this 1985 novella featuring British private school boy Basil Leaf and his cadre of outrageous companions. It’s not a long book, and the postcard set up makes it move faster then usual. I read it in one day, and I actually found myself getting sort of tense because of the drama and the pacing.

When I first picked it up, I thought Dear Popsy would be a subtle satire of the homo-eroticism endemic to the British boarding school system. I’m not sure why, all the descriptions say that “the boys prefer rouge to rugger and bondage to Bunsen burners,” but I guess I was thinking British, gay; must be a subtle satire. Instead, I got some good old fashioned English black humor at it’s best. There’s a certain amount of silliness paired with literary sleight of hand, but punctuated with just enough specific description in only the best places as to really make the whole thing pop. Unlike my usual fare, the sex in this book is largely alluded to, rather than specified, and played for laughs rather than for titillation. But that doesn’t mean there’s anything missing. Far from it. After months of stale plots and rerun characters whose only purpose is to drive the filth factory, the well-tuned comedic timing in Dear Popsy was a much needed breath of fresh air.

Through Basil’s postcards to his dear, long suffering father we follow the ups and downs of, not only his school friends at St. Clouds, but his parents, parent’s lovers, business ventures, the community at large, and the nation as a whole. Set sometime before the first world war (as far as I can tell), this is definitely a fiction in the sense that any single person this scandalous would never have existed, let alone an entire troupe of them. Basil and his friends put the great Oscar Wilde to shame, and receive almost nothing but praise and a recognition of commonality among their school masters. Only the Head seems particularly put out by their rouge wearing, but the fact that the majority of them are filthy rich seems to go a great way towards easing his conscience.

If you buy this book, be warned that you will want to read it aloud to anyone who may be in earshot. Ben really got into my Basil impression.

My only complaint is that the illustrations seem to come across as being very small in Kindle format, but that could well be my NetGalley copy, NetGalley books usually come with a big disclaimer about the formatting. There are only a few of them, and they’re of no great consequence to the story.