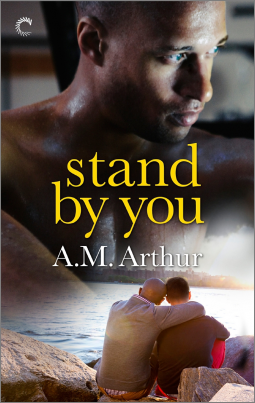 Stand By You
by A.M. Arthur

Thanks to NetGalley and Carina Press for the review copy.

This is the third installment of The Belonging Series. Reviews for books one and two can be found here.

We met Brendan and Romy in book two, when Donner called in former football star best friend Brendan to help rescue his boyfriend Ezra’s ex-trick Romy from a seriously fucked abuse situation. It was pretty obvious right then that book three was going to be about these guys.

After literally breaking free from his dom turned kidnapper, Romy is shattered and experiencing a lot of social anxiety. Closeted, shy Brendan becomes the friend Romy needs, but he wants more than that. Can they overcome their own personal issues in order to build the kind of life together that neither of them had ever dared to hope for? With the help of their friends, the answer looks like it could be yes.

You may recall that I took some issue with the way trauma and anxiety was portrayed in the last book, Maybe This Time, and there still is a little bit of that for me. For example, in my limited experience, the first thing to do about an abuse survivor having a panic attack is to give them space. Certainly don’t touch them, and really really don’t touch their neck. My teeth itched through what was supposed to be a touching scene where Romy is having a panic attack in a bar and his future therapist, at that point a relative stranger, reaches out and casually palms the back of his neck. This is intended to show how they’re a really great therapist and can calm down panicking people, but it just freaked me out by osmosis. It’s really likely that I’m insinuating my own personal issues in here, and not being a medical professional, I’m just talking out my ass, but for future reference, if I’m having a panic-attack, don’t touch me. You might get kicked. Or puked on. Just saying.

Anyway, aside from that small incident that’s probably more about me than the book, I really enjoyed Stand By You. Romy and Brendan felt real to me. I could know guys like Romy. Given a different set of circumstances, I could have been someone like Romy. Mainly, if I was just a little bit less of an asshole.

One of the things I really like about Arthur’s books is that no one is saving anyone else. Her protagonists are flawed, amazing, uniquely human characters that come together on their own terms, not for a perfect love, but for a real love. The kind of love that can offer a little redemption, if we just reach for it.