Today I was talking to my buddy Charles about the blow-back from the Supreme Court’s decision on gay marriage, and this came up. After such an amazing victory, there’s bound to be some negative press, but a lot of my friends and family aren’t getting that from actual bigots, but from the very allies and news organizations they turn to for support.

We’ve all seen the Humans of New York picture of the boy crying about how people won’t like him for being gay. 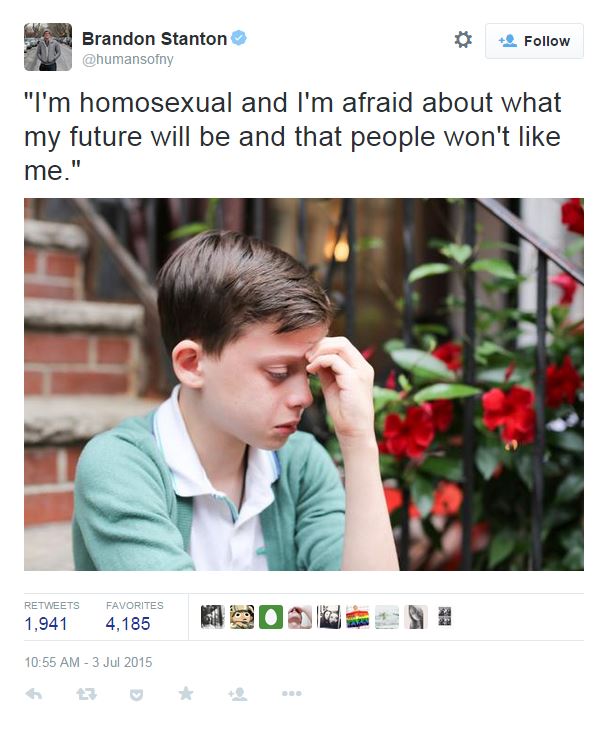 When I first saw it, all I could think of was how in the world someone so young, someone who lived in this day-and-age in a major city center could think that people would hate him for being gay. But I realized that the news media has been wall to wall dickbags since the decision came down. Everyone is so hot to get outraged at bigot stupidity that we don’t realize the true cost of this itch-scratching.

Every time we post a “look at this asshole” comment, we are not only decrying the asshole, we’re shoving the same exact asshole in everybody’s face again and again. In theory, it should motivate us all to action, and sometimes it does. But we see this shit in a constant stream day in, day out, and we can all only give what we can give.

Straight white monoculture tells us our lives should be terrible. Intentionally or not, the images we see of people of color and LGBT people on TV and in the movies are miserable. So we internalize this idea that we’re meant to suffer, and we take it into the movement with us. We give our time, our brains over to the fight, and at the end of the day, what are we fighting for?

We all want the world to be a better place. In general and for the next generations, but also for us. So if we’re working for our quality of life, does it make any sense to lessen that quality through constant exposure to bigot shitheads? To follow sensationalist news stories and sensationalist people that rile us up without any presenting any solutions?

There’s a time for anger, and that comes for all of us. But after that, what kind of people do we want to be?

It’s important for me not to have the constant stream of indignant ranting every single day. I try to keep it to a minimum on this blog. Not because there’s not things to be upset about, because there are, and when it really comes up, I won’t shy away. But repeatedly posting and re-posting every racist, sexist, or enraging thing someone said doesn’t get us anywhere in the long run.