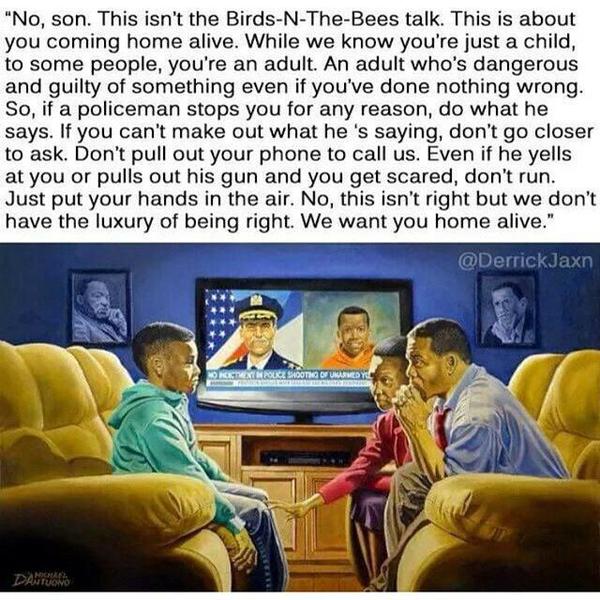 You’ve probably seen this thing making the rounds on social media. The part that really spoke to me, the part I haven’t heard in a lot of other places is that you should never move closer to an officer who you can’t understand. It’s a human reaction to lean in when you can’t hear someone. That’s actually one of the reasons those shitty Nigerian scam letters are so poorly written. A person wants to understand as much as they want to be understood. When you can’t understand someone, you engage with them harder as a response. This can be interpreted by a police officer as threatening. Even if it’s the farthest thing from your mind.

It’s important to remember that a police officer doesn’t have a normal job. He goes to work every day loaded down with enough weapons and ammunition to annihilate a small fishing village. He is wearing body armor which is hot an uncomfortable, he’s driving an armored car that somebody probably puked in recently. All day long he’s been hearing a steady stream of horrible shit happening in real-time over the radio, and he’s been dealing with similar stuff in his face-to-face interactions. It’s likely he knows someone who was killed on duty, and it’s even more likely that he himself has been wounded at least once during his career. Some studies put the number of officers wounded on the job at a nice round 100 percent. Working in law enforcement is like working in customer service, except sometimes mad customers stab you in addition to the unending piles of verbal abuse.

There is a thing that happens when people are traumatized like this over a long period of time: their ability to judge what is safe or unsafe becomes compromised. This is called hypervigilance. Something as benign as leaning in to a conversation can become a life or death scenario in which the officer must defend himself against what he perceives to be a deadly attack. Most police forces train in proper-escalation. If a person is unarmed, your response should be non-lethal. Unfortunately, human nature doesn’t work like that. Fight or flight response is a real thing, and we have almost no control over it in the moment. Your own fight or flight response will probably go off when the officer assaults you. After that, it’s basically up to him if he chooses to use deadly force.

New Year’s Eve when I was 14, I was at a family event that happened to be near the route of the Rose Bowl Parade, which is traditionally a party area the night before. Some of the younger children wanted to see the street, which was supposed to be truly wild. I nominated myself their babysitter, and we all trooped down to the main drag. None of us were concerned for our safety. In addition to teenagers and drunks, it was well-known that lots of families also camped out on the parade route. LAPD had other ideas. None of us were thinking about it, but 9/11 had been three short months before, and there was a lot of buzz about whether there would be a West Coast target and what it would be.

Eventually the kids got bored and we decided to go back to the house, which was just East of the route. Between the time we’d left and the time we came back a police roadblock had gone up. Not being a complete idiot, I told the kids to stay behind me and asked one of the officers what was going on. He said something I couldn’t hear. Without thinking, I leaned in to ask him to repeat himself, which is when he put me in a hammerlock and growled in my ear that the street was closed. Thankfully, I’d been attacked enough by grown men by that point in my life that I’d developed an instinct of non-reaction, so I didn’t fight him, but I did yell “LET GO OF MY TIT!” Because it really felt like my arm was breaking, which is the point of a jointlock. Whether out of embarrassment, or because he realized I was literally a child, or maybe just to get rid of me he threw me on the ground and yelled again that the street was closed.

The kids and I walked back onto the parade route and ducked into an alley just in time to miss well-over 100 officers in riot gear running down the sidewalk four men deep. I have no idea if they went the whole route, and to this day I haven’t met anybody who was on the street that night to corroborate my crazy police story. The families of those kids, who were much younger than me at the time have all drifted apart, or I’d ask them. Of course, we didn’t tell our parents anything when we finally got back to the house thanks to a friendly taxi driver and a couple from Minnesota.

Now that I’m adult, I wish I’d said something. Who know’s how many other girls that officer’s assaulted over the years, and who knows how anybody could identify him today. I’m happy I got away with a couple of bruises. Other people haven’t been so lucky.