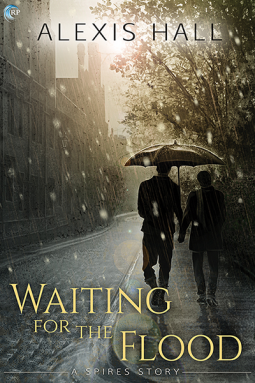 Waiting for the Flood by Alexis Hall

Thanks to Riptide and Netgalley for the review copy. Waiting for the Flood will be available for purchase on Feb. 23, 2015

I requested Waiting for the Flood because of Alexis Hall. I’ve reviewed other of his books, and loved his characters especially. He did not disappoint.

Edwin Tully lives alone in Oxford in the house he used to share with his boyfriend of 10 years, an artist named Marius. He leads a solitary life, having left all his old friends to Marius in the break-up, he’s spent the last two years with his elderly neighbor as his only companion.

When flooding threatens his neighborhood, Environment Agent Adam Dacre shows up literally on his doorstep, and things start to get… wet and uncomfortable.

How does a man who’s spent the last two years in self-imposed isolation finally decide to break the silence?

This is a sweet love story about the way a broken heart tends to mend itself in time, especially when we aren’t looking.

I was enamored of Edwin right off the start. The fact that he has a fairly serious stutter makes the whole things-he-didn’t-say plot element actually believable, and his quiet loneliness was extremely relatable. They say no man is an island, but it’s clear that he is trying really hard to be one anyway. With the waters rising, both literally and figuratively, he has to make a decision: sink alone, or swim for shelter. The acute pain of making what can seem to outsiders to be an extremely rational decision for a chronic isolater was very well depicted.

Adam comes across as a kind of non-character in comparison to Edwin’s rich depths, but since the narrator focuses only on Edwin, it makes sense that we wouldn’t know him as well.

Since this is a fairly short book, there’s not a lot of it to go over, but it’s adorable, and can be finished in a single afternoon. Worth the $3.99 price tag, but I wouldn’t pay more than that.

4 stars out of 5 for being adorable and having absolutely nothing wrong with it.