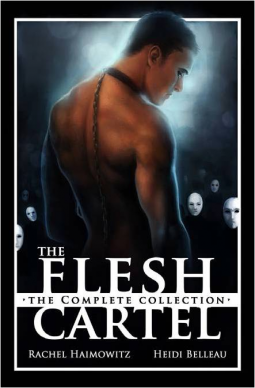 The Flesh Cartel, The Complete Collection by Rachel Haimowitz and Heidi Belleau

I requested The Flesh Cartel back in the Fall of 2014, and every time I would sit down to read it, then put it down again, I thought that I was just having a bad day. I’d go on and read other books and review them, and then try to come back to no avail. I’m finally throwing in the towel. It’s unfair to continue to think that I will someday finish this book.

For those not in the know, this popular series centers around two orphaned brothers who are kidnapped and sold into sexual slavery, where they are meant to be trained as the perfect submissive slaves.

The first several chapters are straight up terror and pain. Again, usually it’s totally my thing, but it was hard to get through. The original serial nature of the piece made it seem drawn out in book form. A lot of intense things happen in every chapter, because they were originally set as stand-alone pieces meant to sustain a reader until the next installation, but the plot moves incredibly slowly, a least at first.

The boys are likable characters, and they are very clearly not enjoying any part of their situation. I usually prefer my hardcore to be similar in caliber, but with an eventual kernel of consent or underlying secret desire, and while that is threatened, it’s not something that happens. So I begin to feel more than a little bit like the bad guy by continuing to read these characters into deeper and deeper depths of insanity. Yes, I am the kind of crazy person who actually (sort of) believes that I put the characters into and out of danger by reading or not reading. It’s a sickness.

I do know that the boys eventually escape, and I have a feeling that the story gets way less repetitive after that, but it was difficult to get there for me. I’m going to keep going back to the work, and when I do finish it, I will be updating this review, but I wanted to get something out after so long in draft.