I am writing this post from the farthest corner of my local business times holiday mixer. In order to make it feel as much like high school as possible, it’s being held in an actual, honest to God cafeteria. They have a big curtain drawn over the microwave bay, but I’m not fooled.

There is apparently food but it’s buried so deep in an angry lump of suits that I’m not sure I can resist violent shoving if I were to try and get near it.

I mean, this would probably be great if it weren’t the 2nd to last activity in my totally overstuffed day. Every single thing in my day either started or ended late, and by the time I finally got here, parking was completely unavailable. After the third go-round the entire parking complex, I pulled an angry stop in front of the door man and begged him to tell me where I can park. He said I should park in one of the dozens of spots with giant “RESERVED FOR COMPANY X” signs as if I should have known. “Oh, this spot is marked clearly as being reserved for a company I have fuck all to do with. That’s where I belong.” Ugh. 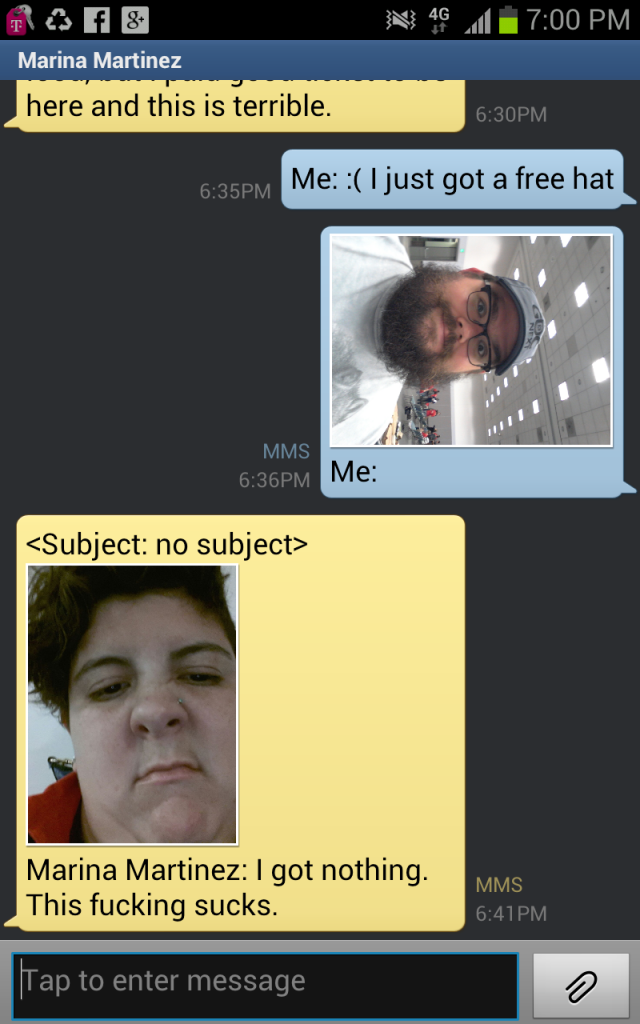 Okay, I tried a half hearted go for the food. There were just so many people, and the cafeteria ceiling started to feel like it was coming down on my head. Then there was a gap in the crowd that I thought was an opportunity, but was really just an old guy in a wheelchair and I decided it was time for me to be on to my next engagement. If this is how business networking looks, I can’t do it. I haven’t been in such a stifling pile of sweaty white people since I thought it would be a smart move to visit New York’s Times Square in August.

Now I’m writing this from home. Ben is already on his way to bed without me. That’s starting to be more of a regular occurrence than I’m happy with, but I have to tell you guys how I left the really, ridiculously and scarily over-packed business mixer, tried to get some drive through from Carl’s Jr. that I threw away after one, sad, angry and gross tasting bite. Then none of my friend answered their phones when I tried to call them and tell them this story. Then I got lost trying to drive to a meeting I’ve been to far more times than I care to admit. So then I decided to drive up and down every major street in the 2-3 square miles it had to be in, looking for landmarks I might find familiar. Eventually, I got even more lost, gave up, and started to head home. Which is, of course, when I drove right past that motherfucker. And had to turn around.

I’m fucking exhausted. By some miracle, Ben is still awake, so I’m going to go try and convince him to have sex with me while I fall asleep. He never goes for it. Rude.