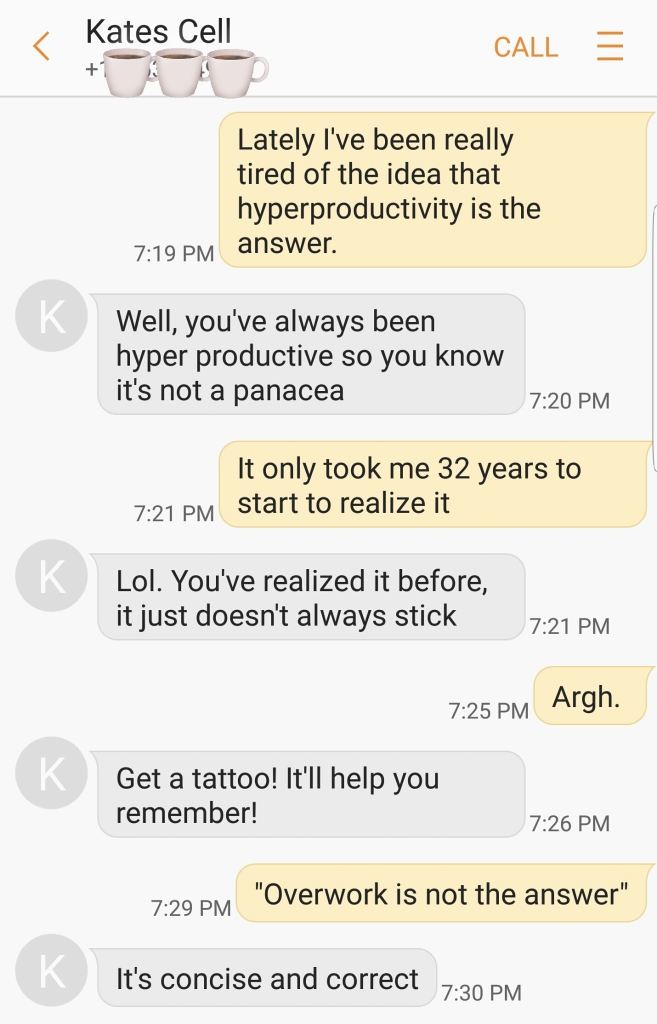 I’ve been going through a hard time lately. Kind of because my business closed, but not really. The real reason is something I started to realize years ago, but like all deeply ingrained and compulsive coping mechanisms, it’s never just one realization that does the trick.

I think I might be a workaholic. I know, how silly. Every person between the ages of 20 and 35 right now is a workaholic. Every woman in business, every person of color, transgender person, everybody who grew up in poverty, immigrated here from somewhere else, or grew up with alcoholic parents. We all know the reality of what it means to be completely abandoned by a system we’re still expected to work for every day like we were never thrown out with the trash, or like we wouldn’t be thrown out now if circumstances changed. The truth is, outside of a few select white children and straight dudes, human life has no inherent value.

And the same companies and industries that will hire someone to work full time without paying them enough to live full time devour a worker like this. A person without boundaries, who regularly chooses the job over their own health and safety. We are the band-aids this broken system relies on to keep itself together. We shine bright and we get promoted and given the big projects, because the company knows that we will be complicit in our own exploitation. Because we will be. Try to put a workaholic at a normal company and it gets real uncomfortable.

Which is where I am right now. I have nothing feeding my workaholic tendencies and it’s ugly. At the same time, I honestly wonder if there even is such a thing as a workaholic. Because that is some pre-recession white bullshit if I ever heard it.

People of color don’t get to be workaholics. Women don’t get to be workaholics. The workaholic was invented in the 1950s when, for the briefest of time certain subsets of middle class white dudes lived in an economic paradise built on union labor on the one hand the racist and sexist exclusion of non-whites and women on the other, and therefore experienced the phenomenon of abundance above and beyond anything they had ever been prepared for as middle class people. In this random accident, some of the white dudes missed dinner even though they didn’t have to, and thus the workaholic was born.

But that’s exactly the kind of shit a workaholic would say. I’ve been around addicts enough to know that crack has the uncanny ability to make everybody who smokes it suddenly realize that addiction is a racist conspiracy theory cooked up by the government to keep us in our place.

What I do know is this:

Surely this compulsive working is just good sense after everything I’ve been through. But of course it isn’t.

I know better than most that the coping mechanisms you come up with in a crisis can’t be your coping mechanisms for good. Indiana Jones survived a nuclear blast in a refrigerator one time in a movie. That doesn’t mean we should all saddle up the Kenmore and bring on nuclear winter. Stuffed in a fridge is no way to live long-term. You do what you have to in order to survive so that you can do better later. Not to relive the same trauma over and over again until it finally kills you years after the fact and without even trying.