So today (Wednesday) is the day my grandmother has her hip replacement surgery. Which means that I’ll have gotten up at 4:30 a.m. in order to meet her at the hospital in Pasadena at 5:30, where we will wait until 7 for her to go into surgery. After that I’ll drive back to L.A. and work a full day, and then I’ll come home to Hawthorne and completely collapse.

I’m writing this from Monday, where I’m already tired from worry and it’s getting in the way of my ability to write other things. Tomorrow, I usually go to my meeting after work, but there’s a massive chance that I’ll skip it in order to get more precious sleep. However, I’m already thinking that I should probably go to the meeting so my head’s on straight the next morning, when I’ll be exhausted and hanging out in a hospital with my grandma, her boyfriend, and possibly (but probably not) my mother, who I haven’t seen since May 19, 2007.

I already skipped my meeting on Sunday night because I wanted to stay on the couch and watch Warehouse 13 with Ben. Look, I know I’m a shinning example of the 12 step community, but they were bringing Agent Jinx back from the dead, and I couldn’t leave it like that, I just couldn’t! He’s fine by the way. My own fate is far less certain.

Probably the most fun thing about going to the hospital with my grandma is that we’ll be pretending that her boyfriend is her son so that he can be let into the pre-surgery room (whatever that’s called) and so that he can make medical decisions since he’s the only one of us that can be there all day with her. Us being me, him, grandma’s best friend, and my mother, who says she might not be able to come since she’s really sick from Chemo. Which is a totally valid reason not to go anywhere. It also makes me feel better since I’m not pushing my mom out by being there since she’s too sick to show up anyway. And it’s not like we really have to super-pretend that he’s her son. I don’t have to call him Uncle Grandma’s Boyfriend or anything, we just say it once and then everybody knows he’s her ‘son.’ Her extremely loving and devoted son (ick.) Whatever gets him in the hospital, I guess.

Anyway, I’m extremely worried about the surgery. I know that hip replacement is a relatively simple procedure, and that old people get it all the time, and it vastly improves their quality of life, that less than 1% of people die from the procedure, etcetera and so on. But I also know that grandma’s primary care doctor told her that she shouldn’t get the surgery until she put on weight, and that instead of gaining weight, she’s actually been loosing it since the doctor said that, and she’s going ahead with the surgery anyway. I also also know that the last time she had a major surgery, she had a stroke that left her legally blind and only functionally literate.

So, I’m worried, but this is a woman that had a procedure done on her leg a couple of years ago, and didn’t tell a soul, except the boyfriend who drove her to the hospital and then picked her back up again. It was relatively minor, but she was still in a cast and a wheelchair for 8 weeks. If it was up to her, we’d just kick her out in the hospital driveway without even stopping the car. Maybe we’d toss her walker out after her, and maybe we wouldn’t. Because that’s the kind of family she wishes we were: inconsiderate, uncaring bastards who would coldly leave their matriarch to die of hip replacement all alone in one of the best hospitals in the world. There, I said it.

Of course, I realize that her seeming apathy about the whole thing, and her annoyance that I would even show up for this is all a smoke screen, because this is exactly what I would do if something serious were happening to me. I mean, this surgery is all I’ve been able to think about for the last week, and instead of writing about it, I’ve written about nothing, and bushes. Because if we had a family crest it would be someone with a sword in their chest looking inconvenienced at having to croak on such short notice. Ignore it, pretend to be exasperated, but for God’s sake, never let the bastards see you squirm. 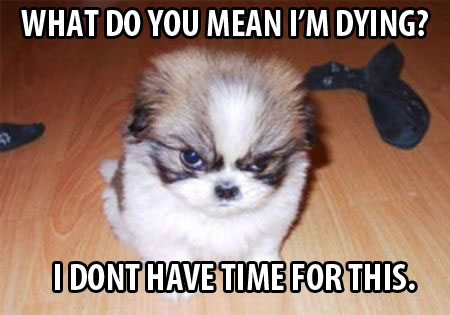 2 Replies to “Grandma’s Surgery and My Writer’s Block”