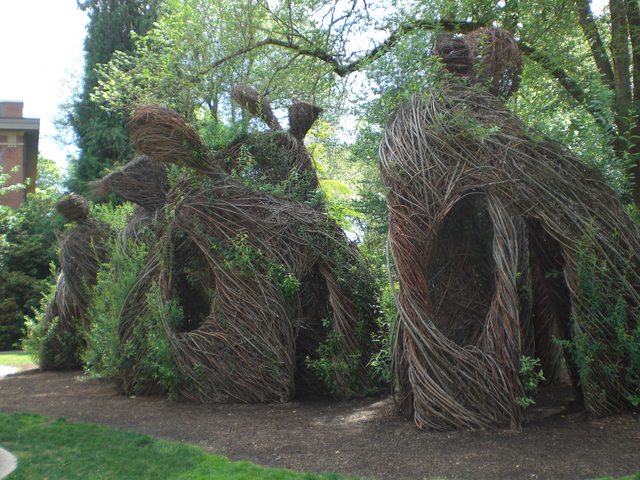 While we were in Corvallis for our recent vacation, Ben’s mom took us to the campus to see the stick installation Patrick Dougherty had built there there last fall. You can see the scale of it in the pictures, but I was really impressed by their stature. Each stick person is basically hollow, in that you can go into their base like a little hut. I made a joke about the number of freshman year virginities that were lost inside the things, because I am raunchy and I have to ruin everything. In my defense, there was totally enough space. Perhaps not for people as ample as Ben and I, but for couple drunken teenagers, they were just the right size.

When I was writing this, I did some research on Dougherty, and saw some of the other installations he’s done. The photos of his other works are amazing, but you can tell they were all taken shortly after construction. Pomp and Circumstance, on the other hand was 9 months old by the time Ben and I got there, and it had started to sprout. The experience of being next to the living branches is kind of magical.

The pictures of the structures from right after they were built look a lot better because the bare branches provide both an echo of, and a contrast to the green trees and grass all around them. The leaves look shaggy, and the structures have started to sink into the background, which doesn’t make for the best photo op, but it makes them more interesting to be near in person, especially when standing inside one of them. I can’t help but wonder what they’ll look like this time next year when the saplings have had time to sprout more, hiding the details of the sculpture further.

One Reply to “Pomp & Circumstance at Oregon State University”