So I mentioned that my grandma is in the hospital. It looks like she’s going to stay there for at least a couple more days. Then she might go to a convalescent home to recover some more, or she might go home and get a home care nurse. The story of how this happened is long and dramatic, and I have told it about a million and a half times.

Basically, what happened is that after her hip replacement surgery, she was supposed to go into a recovery facility called The Californian, where she’d get daily physical therapy before heading back home 100% healed and ready to carry on with her new hip. Instead, they watched her puke up all her food, and steadily decline in cognitive function while telling anybody that called that she was fine. We couldn’t talk to her ourselves, because their single cordless phone wouldn’t work in her room. Her boyfriend was there with her, and tried to tell them that her behavior was abnormal, but they ignored him. Finally, after 6 days of steady decline, her personal doctor came to visit and ordered her to the emergency room. She was re-admitted to the hospital where she’s been for a week now. Apparently, her potassium, sodium and electrolytes were all so low that she was very close to seizure and coma. The trauma has caused damage to her short-term memory that she may never recover from.

I’m absolutely pissed at The Californian staff, not just for letting her slip through the cracks, but also because when I called the hospital discharge coordinator to complain about them, they called me back and tried to smooth things over with me, but that only made it worse. I wish I had written down the name of the woman I talked to, but she claimed to be the manager at the facility. When I asked her about the nurses telling me and my family members that grandma was fine when she was clearly declining, she changed the subject. I tried and tried to get her to acknowledge that question, but she kept talking about her food intake, and her chart, and even complained to me that grandma’s boyfriend is too loud. I regret that I didn’t take a harder line on that, but I gave up and asked her about something I knew would have an easy solution. I asked her what they were going to do about the phone not working in all the rooms. She said maybe they should move the dock to another room. I asked her why they didn’t just get another phone for the other side of the home. She said she didn’t know if that was possible, which lead to me trying to explain how phone lines work. Then, even after me explaining that you just buy another phone and plug it into a jack, she said she didn’t know about that. She kept saying “I’m sorry,” then waiting for a long time, like I was going to tell her it was OK. It’s completely not OK. And the fact that this women thinks that she can let my grandma get this bad and not even try and address the problems her hell pit of a recovery home is suffering from is just insane.

So I’ll be filing a formal complaint with the Department of Public Health, in writing. That’s really all I can do at this point. There’s some talk of her going back to that place after this hospital stay is over, and I feel like that would be a terrible idea, but I’m not in charge. My uncle and my grandmother are, and there are other things to consider like availability, medicaid and what recovery homes her doctor will agree to visit. She’ll be getting a social worker soon, so hopefully we can get her an in home care person.

It feels very much that her being almost 80 years old factors into the kind of treatment she gets, and not in a positive way. I have nothing bad to say about the hospital she’s in right now, but I think that there is this idea in the medical profession that older patients are always going to be a little bit more fucked up all the time and then they die. And if I’m trying to be objective about it, that’s basically true. But those care workers at The Californian were out of line. I think that they were afraid of telling us what was really going on, because they’d lose the medicaid money they got from having her there if we knew. I don’t think I’ve ever hated a business before, but I sure do now. 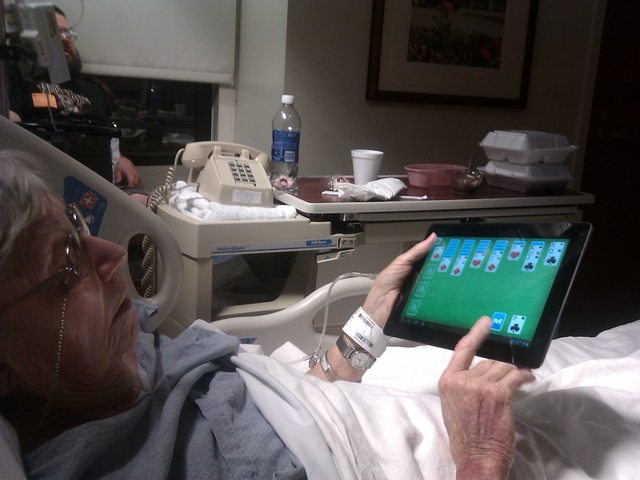 Here’s grandma playing some solitaire on Ben’s tablet at the hospital.