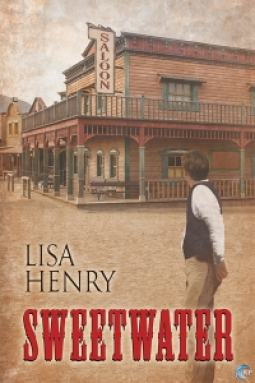 Thanks to NetGalley and Riptide for the review copy. Sweetwater comes out on Sept. 29, 2014.

From the author of the 5-star rated Bliss comes a tale of love and loss in the American West. Set in Wyoming Territory in 1870, this book stars main character Elijah Carter, a partially deaf young man who’s only just coming into his twin passion for penis and pain when he meets cattle rustler Grady Mullins, and his entire world starts slipping away.

The tragedy, murky loyalties, and general goings on of Sweetwater mix with the ignorance and the everyday heroism of it’s citizens in a rich tapestry that winds its way throughout the book. Antagonist Harlan Crane, a saloon owning sadist with a tight grip on the local economy and a penchant for young men who like to be tied down isn’t really the true villain anymore than Elija’s perpetually drunk and verbally abusive boss is the villain. The real fight in Sweetwater is mans own struggle with himself.

When tragedy sweeps through Elijah’s life, he is faced with a choice: Remain (at least outwardly) the good, simple boy he’d been brought up to be, or give himself over Harlan’s ties, his belt, and the pleasure in the pain. As in most situations where only two choices seem evident, there’s also door number three, the mystery door. Does a self identified sinner like Elijah deserve to be happy? Can a criminal like Grady really go straight, so to speak? What matters more: love or vengeance?

Like Bliss, this book is well written and like Bliss, it takes chances, which I love it for. On a technical aspect, Sweetwater actually feels better written than Henry’s earlier work, and I love it for that too. I shouldn’t be surprised, considering my feelings on the creative mind behind these books, but I’m so glad to see an improvement in writing from book to book. Unlike the average ebook erotica writer, who gets as good as they get and then stays there, turning out the same level of work every time, I can see the development of a true craft in process. It’s actually inspiring.

The fact that Elijah’s masochism doesn’t magically disappear with the right lover also endeared the story to me. I’ve been reading a few books where it seems like the main characters sexual tastes change when they meet “the one.” Lately for the vanilla main character to discover their kinky side when they finally meet their soul mate. A guy goes from feeling weird about anything short of a peck on the lips if it’s not under the covers in an entirely dark bedroom to straight up public mouth-fucking his dude in the back of a book store (or something), and that somehow proves that they’re made for each other. Of course, this may well be a backlash against books that had hot, kinky sex in front to titillate, but switched to deep kisses and longing gazes in the moonlight for the true love bits.

Either way I like the strong kink-positive vibe I’m getting. There is such a thing as loving masochistic sex, and you are worthy of that careful attention, my friend. This is a very affirming book.