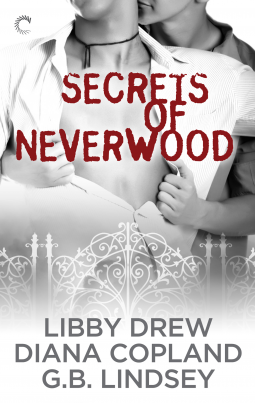 Thanks to NetGalley for the review copy. Available for purchase June 30, 2014

Three ghost stories told by three authors, each focusing on one of three foster brothers who’ve just inherited a crumbling mansion with instructions to turn it back into a home for troubled gay kids, like it was when they lived there.

The brothers struggle to find footing with themselves and each other in a race against the clock, as the property is threatened by a big developer who will stop at nothing to wrench their mother’s last dream from their inexperienced, underfunded hands. On top of that, each brother has his own secrets and traumas to deal with, but not alone. The well-meaning, sometimes too nosy, sometimes downright unhelpful ghost of their foster mother, Audrey still haunts the halls; intent on seeing her boys happy, and her house thriving once again.

First and foremost, this book is fucking cute. Second, I was totally surprised at how threatening the big bad developer got to be. I was genuinely concerned, the tension was extremely well managed, especially in The Growing Season where the plot revolves around youngest brother Danny and his budding romance with the landscaper son of a conservative City Councilman who may just side with the developer out of homophobic revenge. Danny’s story was also the one I wished had been a full length novel. There was so much in there that I wanted to know more about. After looking up the writer, I wasn’t surprised to learn that I’d read and enjoyed her only novel to date, A Reason to Believe. I’m not much for ghost whisperers, but this lady knows how to turn the screw. If you like a high heart rate, Diana Copland can help get you there. My one complaint about The Growing Season, aside from wishing there was more of it, was that the sex could have been way hotter if she’d committed to the power dynamic between the two romantic leads. As it stands, they gloss over it and pay lip service to it, and it could be so much more.

One Door Closes was my second favorite of the trilogy. Clinical depressive, and all Grade A nerdlinger Calvin accidentally hires his high school boyfriend to supervise the massive and time consuming remodel on the house; hilarity ensues. A giant and terrible horrible thing lead to their break-up ten years before and now that they’re face to face again, Calvin can only try not to puke out of sheer lust and regret whenever building plans have to be gone over. There’s more than that, obviously, and it is ultimately a very sweet story, but it does have my pet peeve of major plot points being driven in all or in part by a lack of communication.

As for the rest, it’s not that I didn’t like The Lost Year, I still enjoyed the crap out of it, but it’s neither as tense as Growing Season, nor as adorable as One Door Closes. I gave Libby Drew’s Paradox Lost 4 stars out of 5, so I know she does good work. I think that the added difficulty of wrapping up several plot elements that started in books one and two, along with a complicated story on top of that made this section harder to follow.

Oldest brother Devon starts out on a mission to reunite a man with his son, detours over to an affair-turned-romance, slips into child wrangling, and ends up with some pretty epic ghost-assisted home defense. Like his younger brothers, Devon is a lost soul. He spends his time fighting for others, but who fights for him? We’re not really sure because along comes this helpless hottie with a missing child in bad sore need of a knight in shining armor. Then his kid needs trauma counseling, and then the house needs saving, and then the very last thing that happens in the story, and consequently in the book is somebody else is in need of a rescue.

Unlike the first two books, the brothers are suspicious of, and even actively hostile towards his DILF in distress for most of the story, and it’s not even a sure thing that they’re really going to be together until the last couple of pages. I wanted Devon to have the same awesome partner that the other brothers get, but he ended up with a fixer upper big time. Fixer upper and son, actually. It kind of made me sad.

Altogether, the book did keep me awake reading it. The overarching threat to the house was the most compelling plot. I had to find out what the crafty developer would come up with next and how the boys would foil his dastardly scheming. The Audrey ghost was good comic relief without being too deus ex machina, although there is one moment where it kind of has to happen. I also like the interactions with the brothers as the plot moves forward. They start the book as relative strangers, and end up genuine family.

There’s also a tertiary trans character that shows up in all three stories. I like her, I like the portrayal of her. It feels respectful without being didactic. She’s an actual person with actual person issues and the brothers all have their own way of relating to her, which comes out in each of their stories. Not being trans, I can’t speak to the authenticity of the character, but I like that she’s not a walking talking MESSAGE either. She’s just a character who happens to be trans.