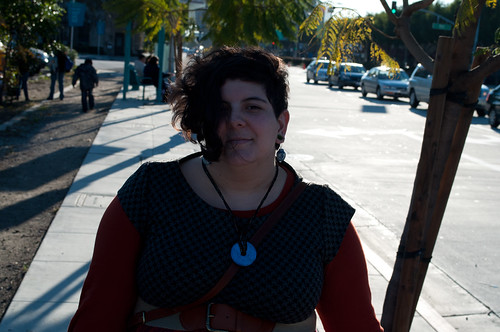 A Picture of me at the Culver City Farmers Market last year.

Our friends have a condo in Culver City, and since they were going on vacation last weekend, they offered their house for Ben and I to use for a little staycation. We showed up on Friday night, but it was so late we did little more than feed their cat and go to sleep.

Saturday morning we woke up and decided to walk downtown for breakfast and The Avengers. We ate breakfast at Rush Street. They were setting up for Cinco de Mayo so there was a lot of activity around, but the service was OK, and the food was good. The again, what can you really do wrong to an omelet and pancakes. Well, they did forget one of the three ingredients in mine, but the ingredients they did include were very high quality and delicious. I would go again if I was in the mood for some straight up American fare served at a trendy bar for a decent price.

After that, we went to see The Avengers, which, let me tell you is amazing! The fights are well choreographed and wonderfully shot. The dialogue is totally summer action movie perfect, everybody’s hot and everything works out amazingly, especially the comedic timing. After we walked out of the theater, Ben asked me “what do you want to do now?” In real life, I absolutely said “turn around and see it again.” Sadly, he thought that was a bit too much, so we wandered around and then headed back to the house.

For dinner we watched reality TV and ate pizza we ordered from Abbot’s. It was delicious, and since we don’t have TV at home the reality TV was particularly fun. We watched a show called Oddities that features the staff of an antique shop in New York that sells human body parts and antique medical gizmos. Every single customer interaction is completely staged, to a painful degree, but it was cool seeing all the weird and freaky shit they sell. Also, the terrible acting was amusing to me.

On Sunday morning, we cleaned up and went back home totally relaxed, feeling great about life. The Culver City staycation was a complete success.