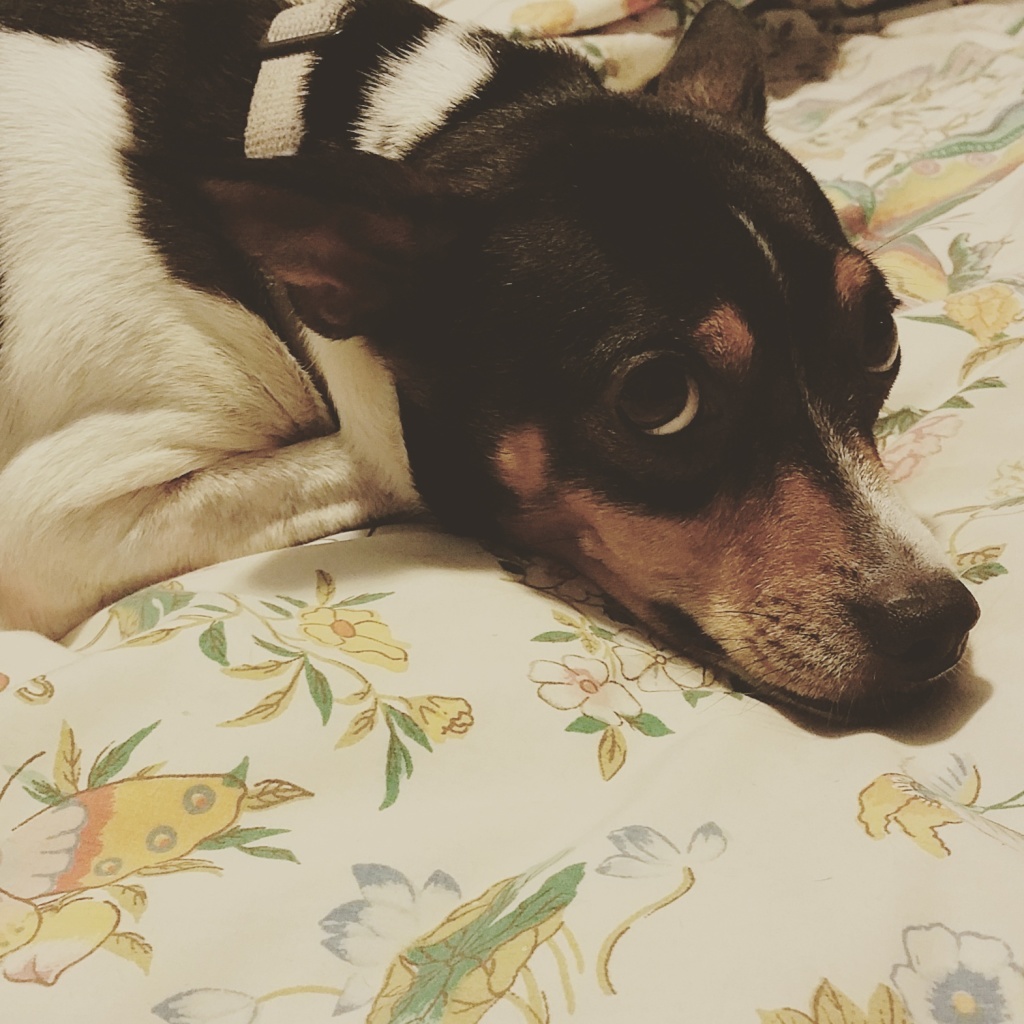 I’m not proud of this, but my dog is dog aggressive. I know. She’s so cute, you wouldn’t think it about her. It’s my secret shame.

So, when we’re walking, I avoid other dogs, not because I’m afraid that they’ll hurt my tiny baby, which a lot of dog owners think, but because my tiny, angry baby will probably try to hurt them, and if she succeeds I’ll either end up paying vet bills for their totally friendly sweetheart, or having to get my dog euthanized when their totally friendly sweetheart looses her patience and murders my dog. Or both.

Pepper’s been a little sick since our trip to see grandma. I fed her a different food, and being on the road tends to fuck her stomach up anyway, so her second turd of the walk was overly liquid.

I’m on the ground trying and mostly not failing at containing this butt soup in a standard poo bag, when I look up and see an overly friendly young lab mix looking expectantly at me and my dog.

Pepper was behaving pretty okay, but I could tell her patience was running thin. I stood up and put her behind me and told the interloper to “Go Home” in a strong, clear voice. Which worked not at all. Strange dog tried to go around me, so I moved pepper away from him. He followed, of course so I moved my dog again.

It started slowly but eventually I was spinning in faster and faster circles shouting “Go Home!” with a leash in one hand and a cooling pile of shit in the other while this strange dog is gaining on me with every turn.

If I’d had an opportunity to at least twist the top of the bag closed before mister overly friendly and completely unattended came onto the scene, it would be different, but there is literally a tiny shit puddle in a bag in my cupped hand. Anything I touch with that hand will get shit on it.

But a slightly shitty dog is better than a lawsuit, so I closed my right hand around the puddle as tightly as possible, reeled her in with my other hand, and picked her up with both hands, leaving a reeking brown smudge all down her pretty white leg.

Then I shouted for the other dog to “GO HOME!” about 10 more times while he followed us down the street and one time I shouted “Oh God!” when it looked like his goofy ass was going to be hit by a van.

All this happened across from not one but two soccer games going on in the elementary school playground 10 feet away. At no point did anyone offer to help me or my shit covered dog, although I’m pretty sure I heard at least one stoned teenager telling his friend to look at the dog lady. Thanks Cameron.

I felt bad for leaving him obviously unattended and on the loose, but my dog is my priority and she’s with me on a leash. If a little poopey.

I love that Portland is dog friendly. I hate that Portlanders are pathologically attached to the concept of dogs being off the leash. Not every dog is just going to follow you around and totally ignore their doggy instincts to roam and investigate and play. Just because your dog is friendly doesn’t mean mine is.

I washed her when we got home, by the way. She was really unhappy about it and actually jumped out of the tub and made me chase her around the house yelling at her not to touch anything with her poop leg. I’d scraped as much of it off as possible on the walk, but there’s only so much one can accomplish while rubbing at fur with poo bag plastic, which was the only thing I had on me at the time.

Thankfully, none of our furniture came in contact with the poo. It is still safe to come to our house.