We’ll see if I do another MLK hall of fame this year. It depends on the quality of the tweets. Anyway, here’s a repost from last year for your holiday pleasure.

In honor of the great man himself, I tried to do something a little different with this Hall of Fame. Rather than finding the biggest car wrecks, I at least made a passing attempt to stick to the positive side of things. However, there are a few things I want to clear up, which I never realized people might not know about Dr. King, but thanks to twitter I have now learned some of you have no earthly clue about.

Today is not his damn birthday, people! Nor is it the date of his assassination. Think about it. A fixed date can’t be the third Monday of Jan. every fucking year. It’s God damned impossible. His real birthday is Jan. 15, and his assassination day is April 4. The holiday is designed to fall near his birthday while still conforming to the Uniform Monday Holiday Act.

King was not a fucking Republican, nor was he conservative in any way. Stop saying this, it’s a damned lie. MLK was a radical advocate of non-violence in every avenue. He opposed the war in Vietnam, advocated for birth control and family planning, and his right hand man for many years was openly gay in a time when homosexuality was illegal. Dr. King was in Memphis trying to drum up support for striking union workers when he got fucking shot. So stop pretending that MLK would have had anything to do with the damn Republican party, especially the Republican party of today. He was disgusted by both parties when he was alive, he probably would feel much the same today. Also, that’s not the fucking point, jerks. All these assholes are being racist shitheads while pretending that 1. MLK would ever be on their shitty side and 2. that just because they’re not threatened by one black man that’s been dead for 50 years they get some kind of pass to defend a racist, sexist, homophobic party that no longer has any principals and only exists at the whim of the super rich. God Dammit.

I mean, MLK, as much as Gandhi, JFK, or any other human in history had is own problems and flaws. No man is a saint, but blatantly denying actual, research-able history just to prove your own stupid point (which is what? That smart people are Republicans too sometimes? Yeah, I know a few NBD) is intellectually lacking to say the least.

At least her heart’s in the right place.

I didn’t learn one thing from MLK day or catechism.

Well, one of those things is actually irrelevant.

MLK was 26 when he organized the Montgomery boycott. Don’t tell me you’re too young! Turn off the video games. Team bring it.

Maybe none of you guys are going to geek on the fact that Barack Obama was sworn into his 2nd term on MLK day, but I totally loved it.

I cannot be silent. #MLK twitter.com/chanesteiner/s…

Was just asked if I wanted a chicken dinner to celebrate MLK day. Progress. And hell yes I do.

Never refuse free food, no matter how racist it might be.

Please your man tonight by dressing up as MLK.

MLK twerked to achieve his dream so why shouldn’t you?

There were a ton of these, but this one was the funniest.

You’re smoking weed to honor MLK? Lol. I’m sure that’s what he would want.

I’m certain MLK would appreciate my plan to spend today laying in bed and eating Doritos.

MLK Jr. never even got to play Banjo-Kazooie… I hate assassins

OK, but that game had fucking save point problems. I think Dr. King is more of a Mass Effect kind of guy.

this might be the best MLK photo EVER! So many layers of flourish here 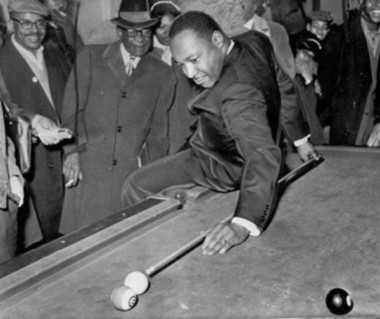 Happy MLK Day, the stormtroopers still have to work because they’re all white.

Jesus died for my sins and MLk jr. Died for my black sins… right? or am I mixing something up.