Trigger warning: Frank discussions of incestuous rape, and descriptions of sexual boundary violations of a child.

My friend Krista asked me this today: “I’m curious if you have an opinion on the Woody Allen/Dylan Farrow/Robert Weide back and forth that’s been in the news. If you do, I’d love to read a blog post on it (if you’re still taking requests).”

First off, yes. I am always taking requests. 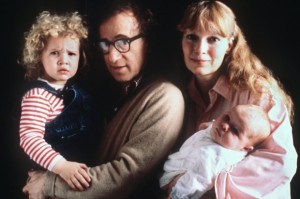 Secondly, I’ve been wondering how I would write this, if I were to write it. Krista’s comment was the nudge I needed to put it on paper. I have a strange sort of perspective, if you could call it that. Most of you know that my grandfather, the man who raised me from ages two to thirteen was a rapist. One night, I woke up with him in my bed, drunk, trying to lick my face (an action I only have context for as an adult). My grandmother was crying, screaming for him to get away from me and for me to get away from him. She had him by one arm, and was trying to pull him off of my bunk bed railing. Eventually, they left, and it only occurred to me in adulthood that it was strange behavior. In the face of his violent rage, face licking seemed less harmful, but equally terrifying.

By the time I was thirteen, I was out of the house; sent to live with my mother. The explanation at the time was that she could, and therefore and should take care of me. The way I interpreted it, I’d been my grandmother’s burden for far too long, and she was looking to unload. Again, I didn’t know until years later that thirteen was his age. Other relatives of mine had not been so lucky as to have had somewhere to go before he raped them. I’ve told that story before, but the older I get, the more I realize that it doesn’t belong to me, and therefore isn’t mine to tell.

There were more besides my grandpa, family members and people who I, usually through unabashed hostility, managed to skirt where others had been caught. Sometimes I wonder if I was an abhorrent child out of a sense of self preservation, or out of training. There are things we can never say out loud, but that we telegraph to those closest to us like a megaphone.

But I’m writing about Woody Allen, and Dylan Farrow, and the shit-licking suck-up Robert Weide. In all truthfulness, Allen may or may not be a kid fucker. None of us can claim to have been in that attic with him and Dylan. I myself have only my memories, and the word of my relatives regarding the kid fuckers in my own family. But I can tell you one thing: Robert Weide is a terrible person.

Of course he’s defending Woody Allen, he’s the creator of the Woody Allen Documentary. He’s an oil company passing off a tanker leak as an unscheduled delivery. He wasn’t there any more than any of us were there, and yet he is willing to drag a girl and her mother through the mud in an attempt to protect his investment. All the other Woody defenders (hi Diane Keaton) are still carefully hiding behind the screen of “none of my business.”

And maybe it’s not their business. It’s certainty none of my business. But how is any of what I write that isn’t absolutely about me my business? I have a five day a week press deadline I have to take care of here. So I tell you about the time my grandpa licked my face, and then I tell you about what I think of Kid Fucker Woody Allen.

And I do think he’s a kid fucker. Where there’s smoke, there’s fire. I know all too well how people like to protect child molesters. Hell, I’m still doing it to some extent. My grandfather is dead. No one mourns him, and yet he’s the only kid fucker I know that I willingly mention on this blog. In part because of the uncertainty, but also because of the shame. What if I’m wrong? What if the great uncle who had a reputation for being touchey before he ever took me into his office and started showing me pornography when I was 12, who then called me a “prude” when I threatened to tell my grandmother, and who was openly hateful to me on the single occasion I saw him after that; what if it was just a misunderstanding?

There is so much shame ingrained in us about this subject. That, without wanting to, we protect kid fuckers and rapists because it would be so bad to be wrong. For years, I had no context for that thing with my grandpa, and the porno shit with my uncle, or why I was so violently rude to men who tried to be near me for any reason. I was such a bad kid, so wounded that I lashed out. What a shame. As an adult, with an adult’s perception, but also with an adult’s information about much more extreme incidences of rape and molestation that happened to other girls at the hands of these men I called family for so long, I realize how useful my hostility was to me.

So when everybody who’s anybody is lining up to either blast their agenda, or gracefully claim ignorance; when people like Robert Weide blindly (and poorly) defend their cash cow, or when ignorant loudmouths like Stephen King say that Dylan Farrow’s letter contained “palpable bitchery,” I think that there is a use for commentary from someone like me in this circle. 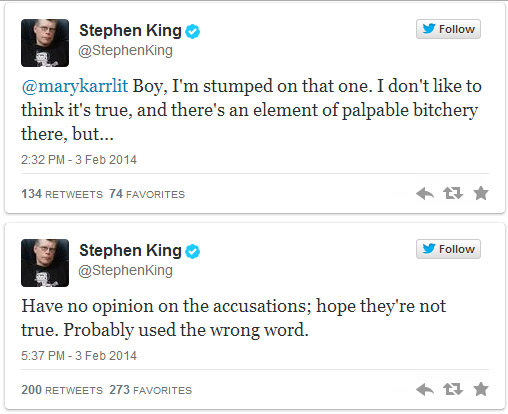 I forget sometimes that there are people in this world who’ve never had to think “I’m not sure why this man is licking my face, but any second now, he’s going to start punching me in the head again, and that will definitely be worse.” I don’t think that Stephen King has his fight or flight instinct triggered every time a dude touches his arm or stands too close.

I’m not saying I live in misery, nor am I’m tortured and unhappy. Dylan Farrow is six months younger than me. As it happens, we both had eating disorders and we were both cutters. As it also happens, we are both (at least according to her letter) happy in new lives we’ve made for ourselves outside of the abuse of our childhood. And for the record, I personally feel that any sexual boundaries that were crossed were far less harmful to me than the ongoing emotional terror and physical violence in both my grandparents’ and, eventually, my mother’s houses.

These things are like a tennis elbow to me. Sometimes it plays up, sometimes I need to hang back for a second and catch my breath. I think that too many times, survivors of abuse are either invisible, or we are broken, or we are palpably bitchey. It is so hard to look at us as individuals and as people. Everybody wants to know if Allen fucked his kid, if he continues to fuck kids. Everybody wants to pick a celebrity side.

As for me, I know how hard it is to say some of this shit out loud. And I only have 100 people who read this blog. Imagine if the world had been watching for the last 20 years. Imagine if, instead of dying alone in a nursing home, unmourned and unburied, my grandfather was celebrated in every medium. Would I say these things so easily? 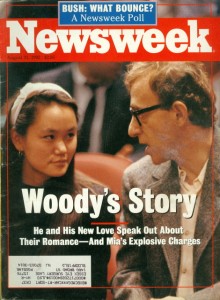 Woody Allen “ran away” with Soon-Yi Previn when I was seven years old. That’s how I learned who Woody Allen was. He was never a great director for me, he was always that guy who fucked his own daughter, and yes, I know that Soon-Yi was never actually his daughter, but I have been 19, and I have had a mom with a 50-something-year old boyfriend, and as nice a man as he is, it would take a mountain of brain damage (or years of regular sexual abuse) to ever make me think it would be cool to fuck him. And, more importantly, I’m sure he feels the same way. Because he’s a decent person. Which is not something I can say I’ve ever thought about Woody Allen.