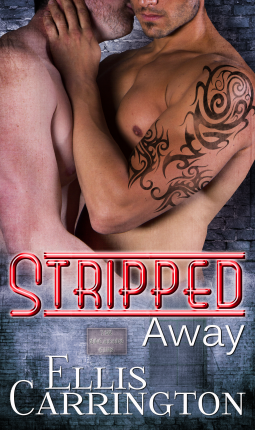 Stripped Away (The Escapade #2) by Ellis Carrington

Thanks to Netgalley and Ellis Carrington for the review copy.

This is the second in a series, but you really don’t need to read the first one to get the lay of the land. David is the son of a now disgraced preacher man, Ricky is a bisexual strip club owner looking for anything, as long as it’s not serious.

After a contentious start, the boys go from battling it out to sticking it in, but can their relationship really last? Crazy exes, family emergencies, and the rigors of everyday life in the heartland conspire against them. Will their love shine through?

This is kind of standard, enemies to lovers track. Nothing’s really ventured between the dudes involved, and nothing’s really gained. The good thing about Stripped Away is that the emotional “I can’t… but I want to… but I’m not sure… but does he even want to… but but but etc.” that so many erotica writers tend to fall back on for drama is mostly internal. So there’s no dramatic storming out followed by dramatic declarations followed by even more storming out. Thank God. But there is a lot of uncertainty that seems to simmer but not quite boil in this weird way.

The tension didn’t strike me as being that high, despite the plot having a lot of things to be really tense about. I can’t put my finger on it. But even the very dramatic scenes where the characters were in danger, or enthralled with each other were sort of hazy. I think the issue is with the narrator. For example, David’s heart is described as pounding in his ears, or something like that, but I’m not seeing a lot of David himself feeling his heart pounding in his ears. It’s a subtle difference, but I think it’s what’s bothering me.

When a narrator describes the actions or the effects of the story on the characters without getting inside them, they all end up with this lacquered feeling, like a diorama of a story. The dialog in Stripped Away is great. The characters talk like real people, and they actually speak to each other, which I love. But they don’t relate to each other because of this lack of internal narration. That small edition to the next book should be the missing piece that ties this whole thing together.