I don’t know why. There are so many other, more awesome It Gets Better things out there done by famous people, and successful people and handsome people. People far more qualified to attest to the “betterness” of life in adulthood than I am. But lately, I’ve been really feeling like I should make something for the little fat girl who gets called “it,” who won’t grow up to be beautiful, or rich, or successful, but who has the potential to grow up to be happy. Happy beyond an ugly little fat girl’s wildest, craziest dreams.

I didn’t have confidence when I showed up at grade school. I am told I did fairly well with other children despite my step-grandfather’s physical abuse until I went to live with my mom for a summer before first grade. Among other things, her meth-maker boyfriend attempted to choke me to death on the living room floor. Obviously, he didn’t succeed, but it’s an experience that stuck in my mind. It was especially compelling because the whole time he was choking me he was screaming that he was going to murder me. It’s hard to not be impressed by someone who’s intentions are that clear.

Needless to say, after returning from my summer studying the effects of speed psychosis on a 180lb man, I had some social issues that I needed to work out. It doesn’t help that my grandpa’s abuse started to ramp up. His daily affirmations that I was no good, would turn out like my mother, wasn’t worth anyone’s time were paired with occasional violent outbursts where he would raise his fist high in the air and smash it down on the top of my head like a sledge hammer, or if I would run and hide in bed, he would grab a leg, or an arm and punch wildly at anything he could reach, which wasn’t always much – the benefits of the top bunk. Sometimes I could outrun him. If I made it outside, he wouldn’t chase me after that. I spent some nights in the back yard, watching the windows for when I could sneak back into my room.

I showed up at school with several problems.

I didn’t make many friends. I didn’t fit in at school, I wasn’t welcome at home. My grandmother did her best to give me a financial advantage, at least. I was in every different kind of creative after school activity and class and therapy a child can be. In third grade I had my own day planner there was so much shit going on.

I spent a lot of time trying to make myself behave right so that people would like me. I made a lot of resolutions about ‘never’ being/doing/saying _____ again. I had a lot of fantasies about growing up to be the kind of woman who’s fashionable clothes are never wrinkled or stained, who is thin without effort, has classy parties, and always knows the most sophisticated, perfect thing to say or do. I felt like the reason I was so unpopular was inside of me, and if I could find that rot and dig it out, I would be normal and that would make me happy. I wanted to be smart and worldly like my grandfather, who always talked about world politics and who hit me when I didn’t grasp complex concepts about international affairs. I wanted to be logical and graceful like my grandmother, who’s ignorance of her own beauty and intelligence was something I aspired to, even as it kept her tied to an abusive sociopath and prevented her from living her own dreams.

To a certain extent, there is merit in learning how to be a member of society. But the level of conformity required by any group of school age children is NEVER a good amount. I had a bad time in school for a lot of reasons. Most of them were completely out of my control. I couldn’t stop my grandfather from punching me, or my grandmother from legitimately believing that sometimes he gets to hit you because he pays all the bills. I couldn’t stop my mother’s heroine addiction, or my fathers crack abuse. Nor could I cause myself to be suddenly fashionable or thin, or white – all things I desperately wanted to be.

The way I contributed to my own misery, and the most important key to my alleviating my suffering, was self-hate. All those outside factors contributed to how much I hated myself, but I’m the one that decided I wasn’t good enough. Like my grandmother before me, I started to think that if all these people thought I was ugly and stupid, then I must be. I did worse to myself than any bully ever did.

When it started to get better for me was when I realized 1: that I had value, and 2: that my opinion mattered more than other people’s. If I truly thought I was smart, no amount of hurtful words or even physical violence could prove me wrong. It didn’t matter that I was unwanted at school and unwanted at home, the important thing was weather or not I was wanted inside myself.

The problem I have with a lot of the It Gets Better messages is that they basically tell people to wait out this torture, because eventually you’re too big to fuck with. And while that is true, what I want to say is: stop participating in your own misery. No kid does anything to deserve the shit they get from bullies, but every bullied kid does something to perpetrate it, and that is they let the bullies win. The reason a bully gets to you is because somehow, somewhere, you’ve allowed that person’s opinion of you to count for something. Maybe it counts because you think they’re cool, or maybe it counts because they can punch your fucking head off, or maybe it counts because they’re an authority figure. But you can’t let those factors have more influence than your own personal worth. A punch in the head is just a punch in the head, but letting someone else tell you who you are lasts forever. Standing up to bullies starts with you, before you even see the bully coming.

Take all the bad opinions of yourself that were put there by your family, by your peers, by society and look at them with an objective eye. Don’t let other people tell you what your values are. I have always been embarrassed by my loudness and my fatness. My grandfather hated to hear me in the house. More than once, what set him off would be my noisiness. But loudness is a factor in my personality, and more than once it’s been an advantage to me. However, I’ve come to realize that not everybody needs to hear every word I say from every direction all the time, so I work on talking softly, but I realize I’m not good at it. Just because I’m naturally something that might inconvenience some people sometimes, doesn’t mean that I should be ashamed of my difference. In fact, despite it’s inconvenience, that difference is what makes me valuable, and I’m proud of it.

To a certain extent, your youth is something to be endured. You have no choices, no resources, and no idea what you’re doing or who you really are. Grown ups have choices, money (amount depends on your choices), and experience (again, mostly based on choices.) Yeah, things might suck for a grown up, that grown up has all the power to fix that problem, unlike a minor who has almost no influence on their exterior situation.

The reason you, reading this right now, should learn to love yourself and tits to everyone else’s shitty opinions is because, while it most certainty will get better on it’s own, you can make it better today and for the future by making yourself most valuable person you know. Because there will always be bullies. In grown up world, we call them assholes and they have trouble maintaining relationships and employment and their lives are shit on a cracker inside their own mouths. But they still exist, and we still have to deal with them sometimes. Which is why it’s important to learn to stand up for yourself, and the way you learn to stand up for yourself is by believing in yourself and the way you believe in yourself is by loving yourself.

It’s not going to happen over night, self hate is a really strong cage you’ve spent years of your life locking yourself inside of. Truth be told, I don’t think anyone ever fully escapes. Start by listing 5 things you like about yourself every day. Remember those things when bullies are near, remember that bullies are not as important as you are, remember that their opinions about you do not matter.

After I started to get some self worth, I remember going to school and realizing how fucking stupid the social system was. Every kid was fighting and scrapping in order to be the most popular. It’s like winning a shit sandwich eating contest. Yeah, you’re a champion, but look what you had to do to get there. When girls would try to tease me for dressing stupid, I would ask them “What makes you think you can tell me how I should dress? Who wants to look like you anyway?” An excellent question it never occurred to me to ask before I had some self-worth.

I’ve dealt with bullies in every school I’ve been in, in every job I went to, and in every venture I participated in. I’ve even been a bully myself. There are people who will walk all over someone who doesn’t have the self-worth to hold their own. If I didn’t know how to deal with that, I would have been focusing on bullshit instead of enjoying my life and my friends. And I have a great life and amazing friends.

I never stopped being fat, or loud, or weird. I still dress funny every day. I’m never going to not be who I am, and now that I’m a grown up I would never ever want to. I don’t make much money, nobody knows my name, but I have an amazing family of my choosing who care about me, and who I care about. Nobody tells me I’m not good enough, quite the opposite in fact.

If you’re dealing with bullying, please take my advice. Start making a list of good things about yourself, find other ways to develop healthy self-esteem. Take care of yourself and you’ll begin to realize how stupid bullying is. You’ll start to have answers for taunts you never thought you could deal with. Believe in yourself and other people will notice. Stand up for yourself, claim your right to a good life. 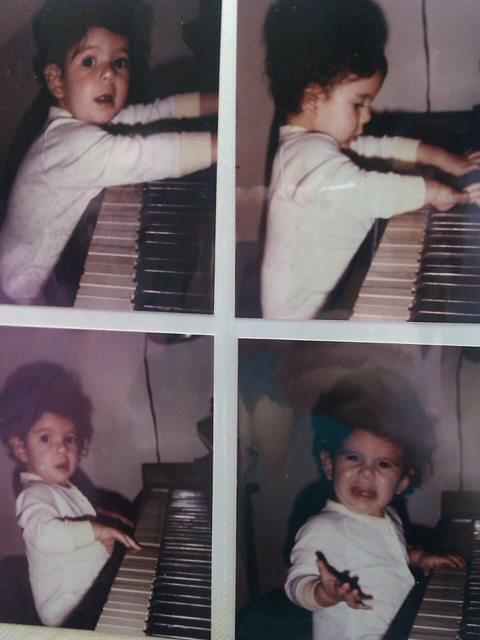 DISCLAIMER: In no way do I advocate putting yourself in physical danger. Standing up for yourself includes protecting yourself. Take the measures you need to in order to be safe. Fight back in every legal way you can, standing up to bullies now will give you an inner peace and confidence that will stay with you for the rest of your life.

One Reply to “Am I Really Writing An It Gets Better Blog?”