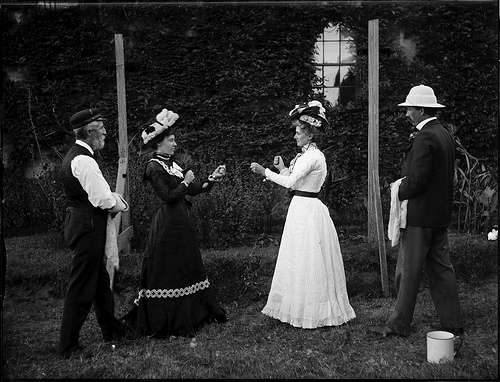 In 9th grade, I moved to a new town and started at a new school where nobody knew me. I only had one friend, a redheaded senior from San Francisco. We intentionally spread a rumor that we were lesbians who had run away to Glendora, where our relationship would be more accepted. I don’t know if you’ve ever been to Glendora, Ca, but it’s major exports are Meth and cops. The first time I heard a beaner joke was in the Ralph’s in Glendora, and the person who told it to me was the checker. Tolerance is not their strong suit. But that doesn’t matter because my fake girlfriend totally dumped me after she got some other new friends who were not interested in hanging out with me at all. Turns out, I’m a little weird. Who knew?!

Anyway, I started hanging out with more people myself, and ended up attached to this small group of band geeks, one of whom, I thought should come out of his shell. He was probably 90 lbs soaking wet and had crazy Christian parents who did things like disprove of mixed-gender group projects. Or something like that. I felt it was my duty to rescue this poor soul from his obviously oppressive household. My inexperience with search and rescue operations betrays me at this point because my game plan was mostly to talk about sex and drugs and to pick him up a lot. Why I thought a 15 year old boy would want to be picked up bodily by a strangely dressed (let’s face it, probably weird smelling) cursing girl, I don’t know. Maybe I thought I could shake the Jesus outta him, set him free with flight.

Well, he started to avoid me. Probably, I thought, because I made too much sense. That’s cool, I’ll just continue to yell his name and pick him up when I see him between classes. He’ll see how much fun it is to be free from the oppression of overbearing uprightness. Like me. I’m free, and I’m picking you up! Isn’t this fun? Let’s talk about boobs and sex!

Around about junior year, I hadn’t seen my little buddy in awhile, so when I did, I enthusiastically launched into my traditional greeting… and he punched me in the chest and yelled “STAY AWAY FROM ME!” That was the day I realized that he probably didn’t appreciate being picked up by a girl. Also the day I realized that I might have some boundary issues. Don’t worry, I’ve worked on that.

Turns out, not everyone wants to be free of whatever I want to be free of. Some people like to be quiet, and us loud, physically engaging people are kind of ruining that for them. After the hitting/yelling incident, I tried to be nice to that kid, I worried I had made high school less fun for him by trying to ‘help’ him. He didn’t seem interested in being my friend, so I dropped it.

Whatever his memory of our strange and physically domineering relationship, I don’t know. I sometimes wonder what he thinks, if he even recalls. He might not. Especially with bullying in the news, I do think back on my strange adolescent perception of friendship and wonder how I had any friends at all in high school. Thankfully, I’ve managed to keep around a few people who knew me from that time despite the fact that I was kind of a stinker. Then again, in our own way, weren’t we all? That kid did punch me in the tit, he’s not completely innocent.

2 Replies to “The Time I Was Accidentally A Bully”