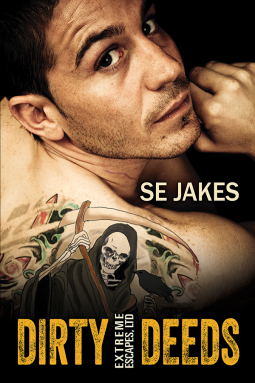 Thanks to NeGalley for the review copy.

If you’ve read Jakes’ Hell or High Water series, then you’re all caught up for this first book of the spin-off series. If you haven’t, you don’t need to. She does a great job of providing all the information for new readers without making it boring for old ones. Regulars will recognize her signature style, which is very similar to the majority of popular m/m writers. Rough and tumble, big and scary men, trained killers and sociopaths all of them, falling deeply, madly, terrifyingly in love with each other. Here and there, a few phrases or situations strike me as singularly fan-fictioney, which is where I think a lot of the top 10 got their sea legs, but Jakes delivers a fun, and hot ride despite the rare, fractious moments of squee.

Dirty Deeds is no different. A quick read, it deals with submission, dominance, revenge, and revelation in short order. The story is compelling, as the characters themselves are interesting people. It also provides some very illuminating backstory for anybody familiar with the Hell or High Water universe.

Without spoilers, the plot revolves around ex-Navy SEAL turned shady freelance merc, Mal, and his mark-turned anonymous fuck buddy, Cillian, a more-than-meets-the-eye British spook. The interesting twist for me, is that Mal is essentially mute, due to a botched attempt to slit his throat several years before. There’s foreshadowing for a miracle cure in the coming books, but I kind of don’t want that. The dudes in these novels are so frequently cookie cutter copies of each other (this one likes knives, this one’s from Ireland, this one’s a marksman, etc.) that having some diversity, especially the diversity of disability (at least the physical kind) is so rare.

The cat and mouse game the men play is fraught with tension and drama. There are some big reveals, and some shocking moments, as well as an honesty that endeared the characters to me, and left me wanting to know more about them, and read more of their adventures.

The sex scenes are split about evenly between live-in-person appearances, and cyber sessions filled with dirty talk and speculative plays for dominance. Not being a huge fan of sexting, I still found these scenes generally compelling. I think any issue I had lies more with my own feelings that remote sex is inherently silly, rather than any failing on the part of the author. But they’re still bookmark worthy.

I definitely recommend this book. If you’re thinking of getting into SE Jakes, it’s a fairly good starting point. For $3.99 at 80 pages, it’s cheap enough to dismiss and short enough to run through in an afternoon.