I mentioned on Monday that we bought our rat terrier Pepper a rainproof jacket for Christmas in Oregon. Specifically, we bought her the Cloud Chaser jacket from Ruffwear. This is actually the second one. The first one we got at REI was a small, which was too big in the chest, and about 6 inches longer than it needed to be. We looked at the tag, realized that we could get an extra small directly from Ruffwear, returned the small and ordered our replacement from their site. The jacket shipped the same day, and arrived within 2 days, but that arrival time probably has more to do with the fact that Ben’s parents house is a mere 4 hours away from Ruffwear headquarters in Bend, OR than anything the company could control after the shipment was out the door. 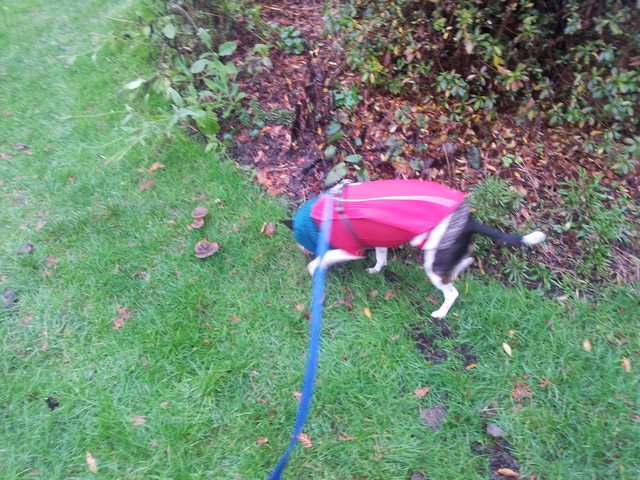 First of all, the jacket is a lot thinner than I expected it to be. Granted, I noticed this when I picked up the first one at REI and still purchased it, but when I read that it had a fleece lining, I was thinking it would be like the fleece I see on dog jackets in the store. This is much thinner. I don’t think it provides any warmth, only texture. The waterproof section that goes across her back is extremely functional, no water gets through there, but the spandex section on the bottom tends to get damp and stay that way. The Teflon coating on the spandex does resist water, but after enough time of the dog running through the wet, it’s effects seem negligible. That being said, this is the only dog rain jacket I could find with any substantial covering on the undercarriage, so she’d be wet either way.

The first walk we took in Oregon she was wearing her Cloud Chaser, her homemade crochet scarf and her harness, and she was shaking like crazy, even after we’d been walking for awhile, which usually warms her right up. After that, she was loathe to go outside, and even snuck into one of the bedrooms to pee instead of telling us like she usually does. 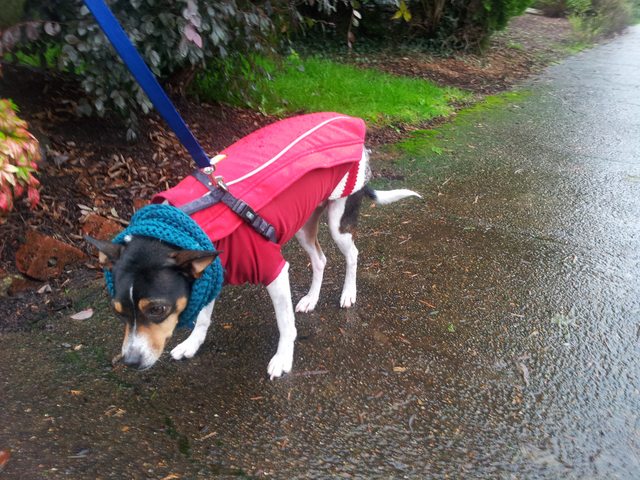 Shortly thereafter, I went to Animal Crackers here in Corvallis to pick up something to either wear under the Ruffwear or instead of it. They were wonderful, by the way. The first sweater I bought was too small, and the nice cashier pointed me to a wool sweater which was cuter, more effective and actually cheaper than the one I had originally picked out on my own. So now she has a little wool sweater that takes care of the shivering, and the Cloud Chaser that keeps her mostly dry. Which is good, because if we put any more clothes on her she probably wouldn’t be able to move. She already walks like a little old lady and glares at us resentfully when she has all her gear on. But at least she’s no longer afraid to go outside. And actually, we discovered that she’s okay to go outside in just her sweater as long as it isn’t raining. If it’s raining, you can hardly expect her to go outside at all, so the waterproof qualities of the Cloud Chaser are not very much use to us right now. 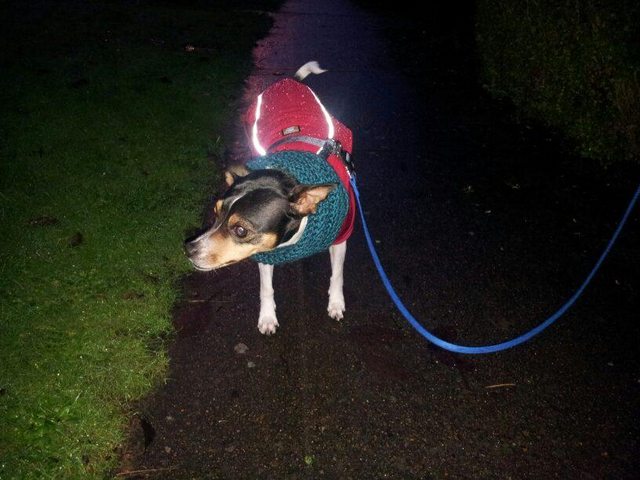 In searching for an alternative to the sweater/jacket combo, it seems like dog jackets are either waterproof or warm, but not both. In terms of protecting our dog in the rain, not moving around a lot, and being easy to put on and take off, the Cloud Chaser gets my highest rating. In terms of keeping her warm, it does nothing as far as I can tell, but after some research I think it’s rather unfair to rate it for warmth, since it seems like it really wasn’t designed for that. Compared to what else is available, the Cloud Chaser is a better product than most, and I think Ruffwear is fully justified in charging $80 for it. For our specific uses, however, I think it’s been out-shown by a simple wool sweater, which I will be reviewing in the future as I have become quite a fan.