Happy MLK Day. In honor of the great man himself, I was going to post the horrible stream of consciousness essay I wrote about race in college, but it looks like I already blew that load on 4th of July

Instead, in honor of an advertiser who recently emailed me asking if I would like to advertise for engagement rings, I will post this gem about my hatred for the institution of marriage from April 2010. Far more of my friends have spouses and babies now, so I want to reiterate what I say in the post which is that I of course care about my friends babies and take joy in them finding loving partners and committing to each other in whatever way they chose. I just happen to resent the assumption that all women only want two things in life: A ring and a runt. I’m way less angry about my resentment these days, as you can actually read in this post from last October where I update my views.

Oh, and speaking of that advertiser, they wrote back. 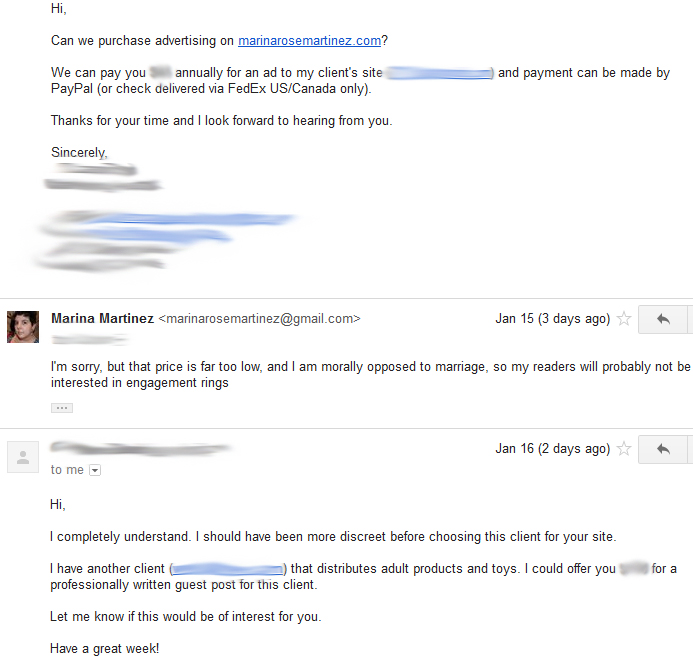 What do you guys think? How would you feel with some kind of advertising on the site? I wouldn’t let anybody else write a post for me, but I would consider letting somebody sponsor a day here and again. If it works out, I wouldn’t actually make money outside of work in Jan., but I’d be less negative than I was planning on being. So that’s nice.

It’s not just your baby, or even all babies, it’s everything they represent, along with engagement rings, wedding registries, showers, parties, dresses and ‘maids.’

It seems like after college, or the age of 22, which ever one comes first, women only have 2 other things to talk about: marriage and children. And I’m not talking about the whole, ‘we’re friends, I care about your life and progeny’ type discussions. Two women can be complete and total strangers, and within minutes they’ll start talking in serious tones about how his mom thinks that the table settings will clash with her hair clips. It’s like some sort of collective breeder insanity.

And maybe I just feel left out of the whole business, and it’s taking a toll on me spiritually, but I can’t help but experience a sense of pressure. In a vacuum, I just wouldn’t care about marriage and children, and other people would or wouldn’t as they saw fit, and everyone would be happy and healthy in their knowledge of self. Except that my dad calls my boyfriend my “live-in-lover” and asks when he’s going to “make an honest women of me,” my grandmother asks me if I think he loves me, and tells me that boys don’t want to marry fatties like myself, and well-meaning co-workers who meet my awesome boyfriend will say well-meaning things like ‘do I hear wedding bells?’

Granted, those all sound like perfectly harmless little comments (except maybe the fatty one), but when it seems to be coming from every direction, all the fucking time a girl less awesome than myself might begin to think there’s something wrong with her for not wanting to get married, or pining away for rings and dresses and expensive priests who don’t actually know you but will marry you to each other for a nominal fee (go Jesus!)

And every time someone in my office shows up with an engagement ring, or a baby bump it’s a brand new chorus, of “let us see the ring!” “How much did he pay in order to posses you like a horse, while ironically saddling himself with all your future child-support payments!?” and “can I touch your fertile cunt?”

It’s not like I don’t care about my friends who are getting married or having babies, even I’m not that much of an asshole. But I care about that as much as I care about any major life change. I’d care if you went back to college, or moved to a new city, because I care about you. It’s not like I actually care about Cleveland, but if you’re there I’d care a little more. That doesn’t mean I want to move to Cleveland. It doesn’t even mean I’d really want to visit. Do you see what I mean?

Every time some girl at work is wondering around showing everyone her rock, or some new mom who we’re paying to stay away from the office takes a break from maternity leave to haul her sticky, spitty baby into work, creating clumps of mindless cooing women in seemingly every hallway at once, for hours at a time, I feel like a jerk for trying to get away from them. And of course, this is when I not only feel like an outcast for not settling down and shitting out my own cunt turd, but I get told to wait until I’m married and pregnant–not just for the irony–but because this is the inevitable conclusion to every female pursuit.

I am so tired of people assuming that marriage is the ultimate state of any romantic union, and that babies are the ultimate goal of any living woman. And every time another marriage or baby situation comes to a head, it’s like team breeder gets another point up on the massively huge board they’ve erected in front of me just to gloat about how much more valid and meaningful they are than me.

Nice, well meaning people will tell me to let it go, and to be understanding of mainstream jerks who act like everybody should like what they like, if only for the sake of my own mental health. But all of those well meaning people are usually safe in the married with children camp, or they were or are about to be. They still operate in a social safe space. I’m just a fat, unmarried, child-hating cunt.