Apparently perennial doucbebitch Perez Hilton did something to infuriate my current fave hip-hopist Azealia Banks. In response she tweeted that he was blocked, and then tweeted this gem, which made a lot of people really angry. Especially since her fan base is majority dudes who act like ladies (at least in some ways) and ladies who love dudes who act like ladies (in any way).

A faggot is not a homosexual male. A faggot is any male who acts like a female. There’s a BIG difference.

Normally, I’d get all super into figuring out what the fuck the back story is, and what Perez did because I loathe half a story. However, seeing as this is is the man who got bapped in the eye for calling will.i.am a ni**er, I got no interest in what he said or did. Those who live by the slur, die by the slur. Which, by the way, a person has to be used to if they listen to Ms. Banks. I actually turn her music down when I drive through my majority black neighborhood because Iook too white and I don’t want people to get the wrong idea.

If u listen to my music and are not offended by the word nigga…. We’re not gonna go here with this faggot shit… We’re just not. Lol

She makes a good point. A point I also have made on this blog when people called me out for calling things retarded. A habit I’ve actually been working on cutting out. Not because I suddenly feel that cursing is wrong (of course not) but because I’m trying to avoid words that aren’t mine culturally unless I’m talking about their use, as I am in this post. But I don’t think that just because I’ve made that decision for myself, I need to be a bitch about it toward others. It’s a weird sort of blindness that makes a person ok with every other swear and slur in the world until theirs comes up and they go running through the streets demanding justice for their tortured soul. If foul language bothers you, Azealia Banks is not the recording artist you want to let into your life.

Although I do wish she had said there’s nothing wrong with acting like a female, but we live in a misogynistic society. It can be very difficult to see value in femininity in a world where femaleness and uselessness are close associates.

Especially in the artificially hyper-masculine world of hip-hop where the fear of the feminine has always been tantamount, constantly elevating homo-social relationships over heterosexual sex acts. “It ‘aint no fun if the homies can’t have none;” “Love them hoes? We don’t love em (nope);” “We serving these hoes and never loving these hoes” and on and on. Even Jay-Z, currently famous for being Beyonce’s husband, has a song where he says “Me give my heart to a woman? Not for nothin’, never happen, I’ll be forever mackin’” Women are for sexual conquest and exploitation, nothing more, certainly not worth any outpouring of emotion.

As a person who loves hip hop, there’s a certain amount of misogyny that comes in basically every song, and as much as I wish it wasn’t there, I hold the immortal technique lyric “If you can take a fucking dick, you can take a joke” close to my heart. I mean, music has been having total idiots make it for years in every genre. Peace and love advocate John Lennon consistently beat the ever-living fuck out of Yoko and their kids.

As much as I think the tweet was in poor taste, Azealia is a 21 year old girl living in a sexist, racist, homophobic society. I’m not going to stop listening to her for tweeting something stupid. There’s an army of self righteous bitches out there who never said a wrong thing, or externalized any of their internalized bigotry, who wait through a babillion words a day just to find a wrong one and hang its owner out to dry. I, for one, value action over mouth running. Call me when people do homophobic, sexist, racist ass shit. I’ll throw stones at that motherfucker. But a stray tweet is just too much to get drama about. 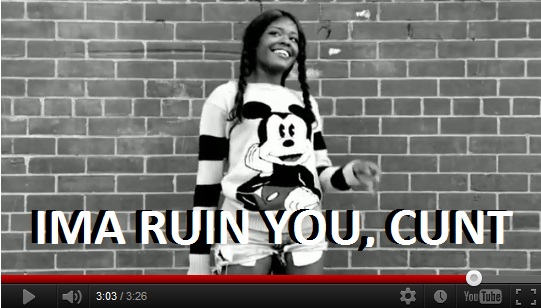 Besides, how can you be mad at that adorable little face?

Editor’s Note: It’s been brought to my attention that Perez may have called will.i.am a fa**ot, and not a ni**er. I can’t tell you how unimportant this distinction is to me. Perez has no journalistic integrity, he is a troll, and as a rule I spend as little time on trolls as I possibly can. The extra effort it would have taken to research that is not worth my time.