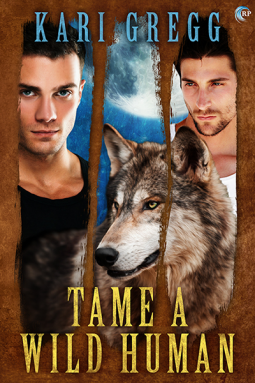 Thanks to RipTide and NetGalley for the review copy.

In a world where humans and werewolves exist in an uneasy truce, humans live in fear of the three days surrounding the full moon. Locked in their walled cities, there is a terrible hierarchy between claimed and the unclaimed. Everybody has somebody that they’ve lost to the wolves, and any human found wandering outside the gates on the full moon is in danger of having their lives, and status changed forever.

When Wyatt Redding wakes up drugged, blindfolded and dropped in wolf country on the full moon, he knows his old life is over. If being a free human is preferable, being a claimed human is the next best thing. The wolves fiercely protect their claimed humans, and despite their tragically short lives, they act as if they are free for the short months and years they survive. Wyatt’s own dad was once a claimed man, and watching him waste away before he eventually disappeared was enough to scare anybody.

But being an unclaimed human is unthinkable. Unclaimed humans are the bottom rung of human society. They are used and abused by every free human. Little more than empty fuck holes, they contract themselves to brothels, or, if they’re lucky, the very companies where they used to hold management positions, taking in an endless string of partners, only too happy to be sexually dominated by their former coworkers.

Wyatt knows that without that token, his life is over. With the token, he has a chance. He can go back to the city, empty the secret stashes he and every other well-prepared human keep of cash and supplies, and disappear before his wolf can call him to his inevitable death. He can start over in a new city, and no one will be any the wiser about his terrible history.

But what happens when the vicious treatment he’s been taught to expect never seems to come? The cruelty he expects from the human world isn’t mirrored in the wolf pack that finds him, and it never occurred to him there might be more to the wolves than he’d been taught. More to one wolf in particular…

That’s a rather long intro for what ends up being a 71 page short, but the world-building is surprisingly complete. From looking at her work, I have a feeling that this isn’t Gregg’s only story set in this universe, and I wouldn’t mind reading others. The concept of discipline in the wolf-pack, as well as the inherent depravity of the human world make for some interesting possibilities in my mind.

One thing though… (highlight to reveal spoilers) At the end of the story there’s a bit about the main character getting to be reunited with his long lost dad that gave me pause. Either it’s going to be that kind of story, and dude is going to get fucked by his own dad, which is totally cool, everybody loves a little daddy action once in awhile, or his new boyfriend/master just thought it would be good timing to bring up the dad thing immediately after shoving a butt plug in his ass. Either way, was kind of odd placement on the dad bit.

4 out of 5 stars because I wish it was longer.. also that piece I put in the spoiler section.