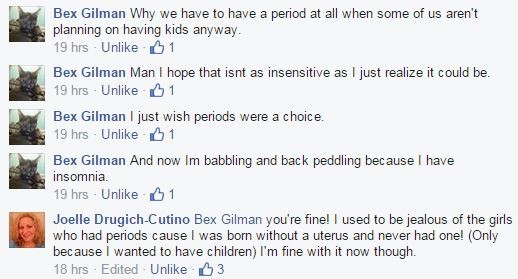 I have endometriosis, which means that I have really painful periods. I take birth control, and that mostly takes care of it, but periods are still really fucking stupid for me.

And yet, if someone told me that that I could trade all that for no period, I’m not sure if I would take them up on that. Don’t get me wrong, when it finally stops I’ll be hella relieved and so fucking happy I’ll probably meet every hot flash with tears of joy. I’ll light Catholic candles in memory of that fucker and I’m not even a catholic. Good riddance to bad period.

Maybe because my period sucks so much, I feel like anything that causes that much grief has got to be worth it somehow. Although… how I’m really not sure how.

The period is such a weird thing. From a young age, we’re shamed about it; taught to fear and expect it with equal intensity. Then when it finally arrives, we get a lot of grief, but also a lot of status as “women.” Like that’s all it takes to be a woman. Then, of course, there are the women who don’t menstruate, who are shamed even more than the rest of us gross, bloody bitches.

You can’t win. If you’re a woman, your period is gross and a source of mockery and derision your entire adult life. If you’re a woman who doesn’t get a period, that gets used against you too. The patriarchy wants us to be ashamed of our femaleness in whatever form it takes.