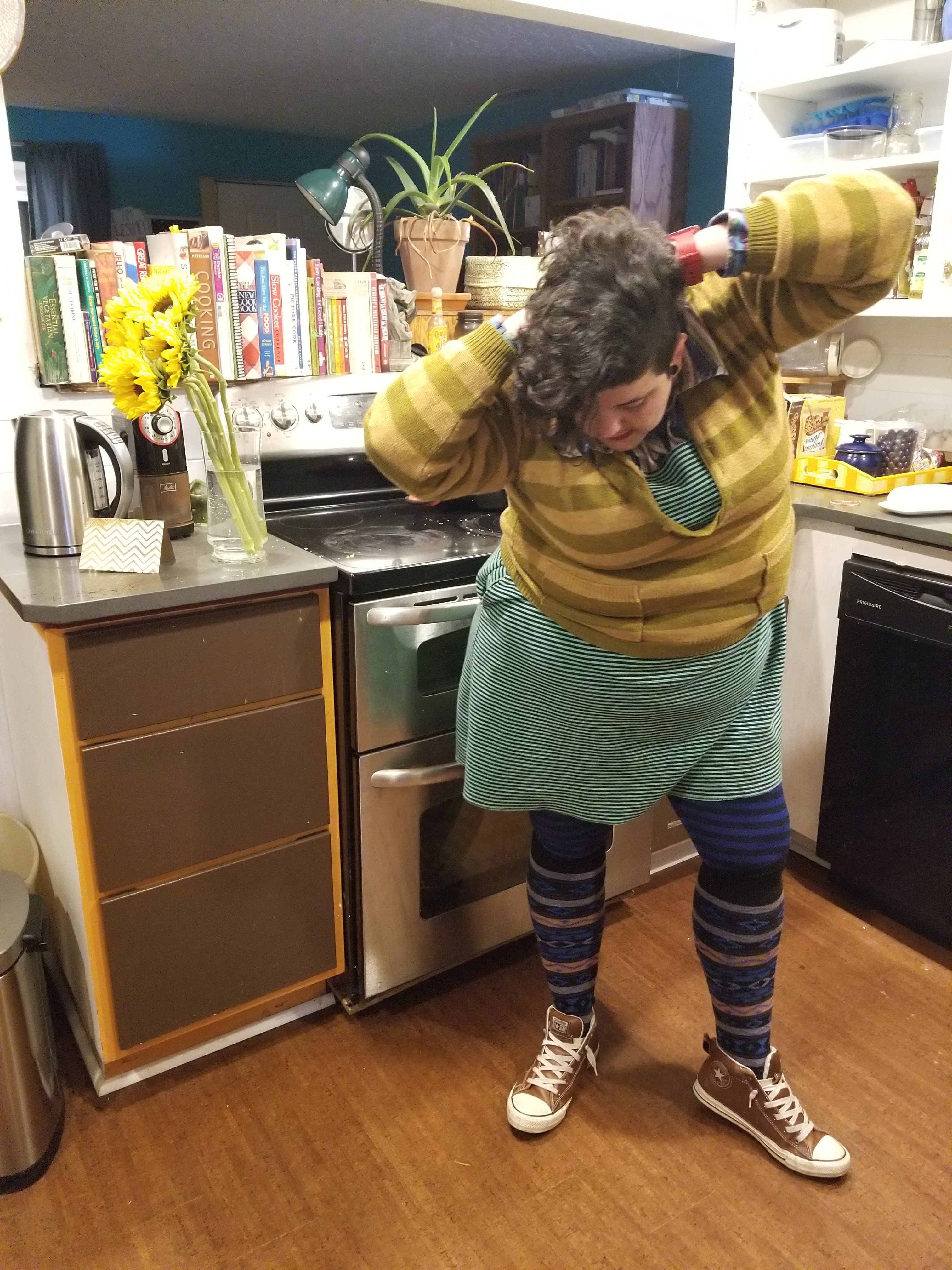 I was actually really melancholy the day I wore this outfit.

After 20+ years of pretending I could mind over matter my anorexia, I’m finally going to a therapist who specializes in treating eating disorders and at first I was feeling really great about it. I was hitting all my goals and feeling physically better (it turns out that when you eat throughout the day your mood, concentration and energy levels are all significantly improved!)

But I saw her that morning and as I was telling her how it took 3 hours for me to figure out how to eat breakfast that ended up being a fucking Soylent anyway, I just felt like shit. I had the day off Friday and Ben didn’t, so I was on my own food-wise for the day. I woke up fully intending to keep my streak of eating 3 meals every day, but instead of making breakfast, I sat on the couch for 3 hours thinking about making breakfast without actually doing anything.

As I was telling her this, I said offhandedly that it was stupid and she said she wanted to make sure I knew that it wasn’t stupid. That it was my disorder using every available opportunity for indecision against me in order to preserve the status quo. And then I really felt stupid.

Not because of what she said, but because she pointed out what I’d said. I’m so used to saying and doing things with only a cursory check-in with myself. I skim across the surface of my own life and I move really fast so that I don’t have to dwell. So I don’t have to feel how deep this really goes.

I remember when I was first in recovery, I didn’t know what my feelings were. When I started safely feeling emotions for maybe the first time in my life, I was confused by them. For years I couldn’t tell if I was sad or nauseous. I wasn’t experiencing my own feelings until they made me so physically ill that I threw up.

I’ve learned to write about it (here and in private), to talk it out, to sit quietly with myself until I know what I’m feeling in here. But I still resist self knowledge. I was born a weak little grub in a world that couldn’t tolerate weakness. So I’ve built a labyrinth of  barriers between my inner self and the outside presentation.

And I can’t tell if it’s genius or madness, but I’ve even figured out how to fortify myself against danger with this glorious fat body I love so much while simultaneously refusing to take the sustenance I need from a world I learned to reject just as hard as I felt it rejecting me.

And if I still lived in the absolute war-zone I was born into, this running, fighting, denying practice would sustain me. The philosophy of take nothing, show nothing, move quickly is an excellent strategy when you are under siege. But it’s not sustainable otherwise.

I will tell anyone else that the coping mechanisms you have developed are proof of your brilliance. You were stuck in an illogical, sometimes untenable situation and your amazing brain figured out how best to thrive without any input from your conscious mind. Your brain built impossible structures to keep you afloat and functioning. And now it might be time to take them down. And that’s hard because you don’t know about the wasteland those structures are built on. They’re built there and exactly in that way in order to keep you from knowing. Because you couldn’t navigate them when you didn’t have the resources. And if you’re starting to navigate them now, it’s because you’re ready to.

But it’s hard to say that to myself.

I tend to isolate when I feel sad. And I usually think that the solution to isolating is a kind of ripping the covers back, letting the light into the wound drama that involves being extremely specific and detailed about what my exact mental state is at this exact moment to the best of my ability. And there’s a place for that. This blog, for example.

For many years, it’s been the only way I know how to communicate my feelings. After never letting anything out, my emotional landscape took on the characteristics of a neutron bomb. There were two states: complete silence or face-melting amperage.

But on this day, instead of isolating the whole day, and instead of only sulking, I put myself around people for a little while and that made me feel less alone, I also drank some coffee which helped. I went to the store and I bought Ben some flowers just because. And I had a lovely evening.

It’s not all pain and suffering. But sometimes it is. 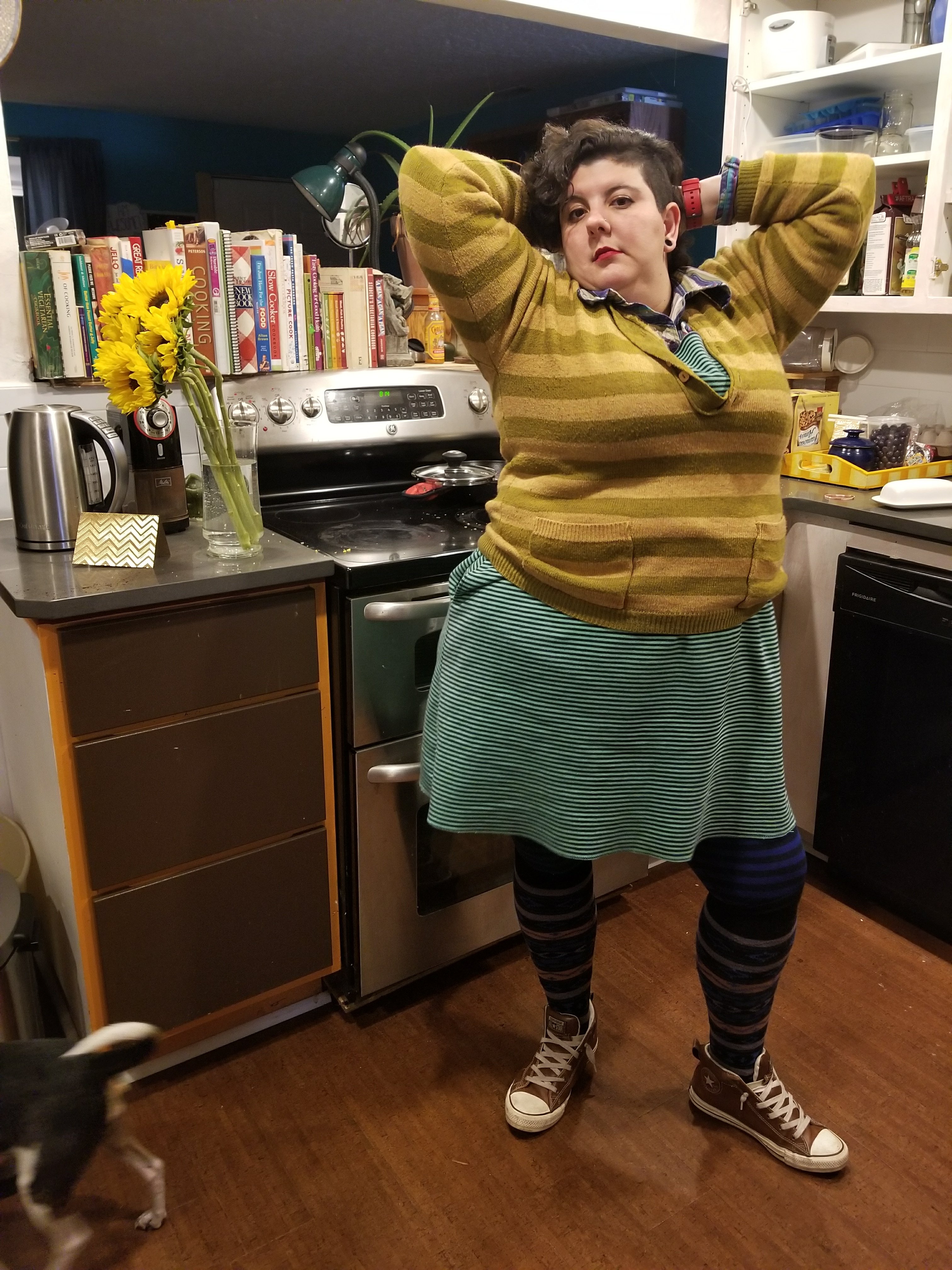 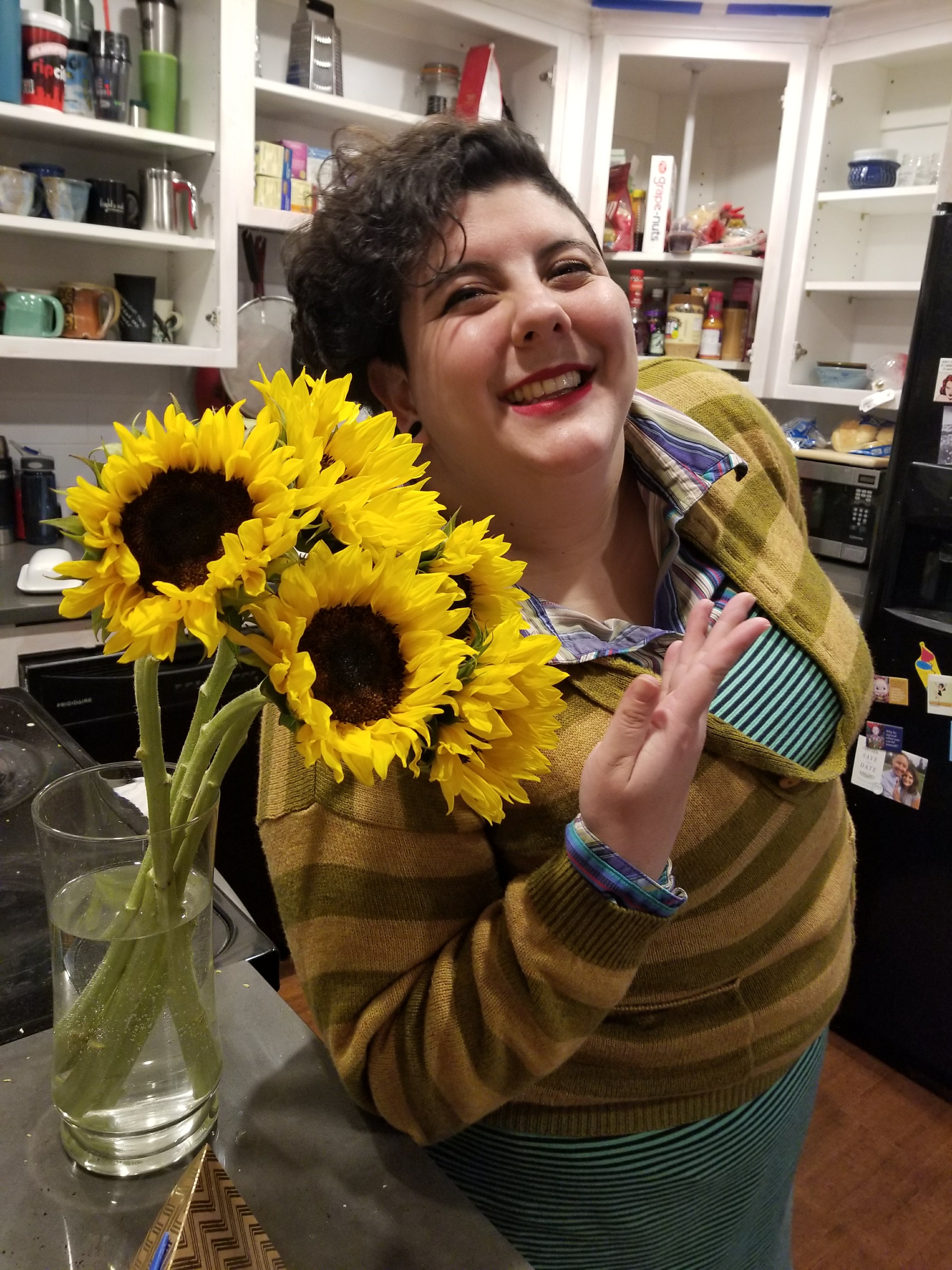 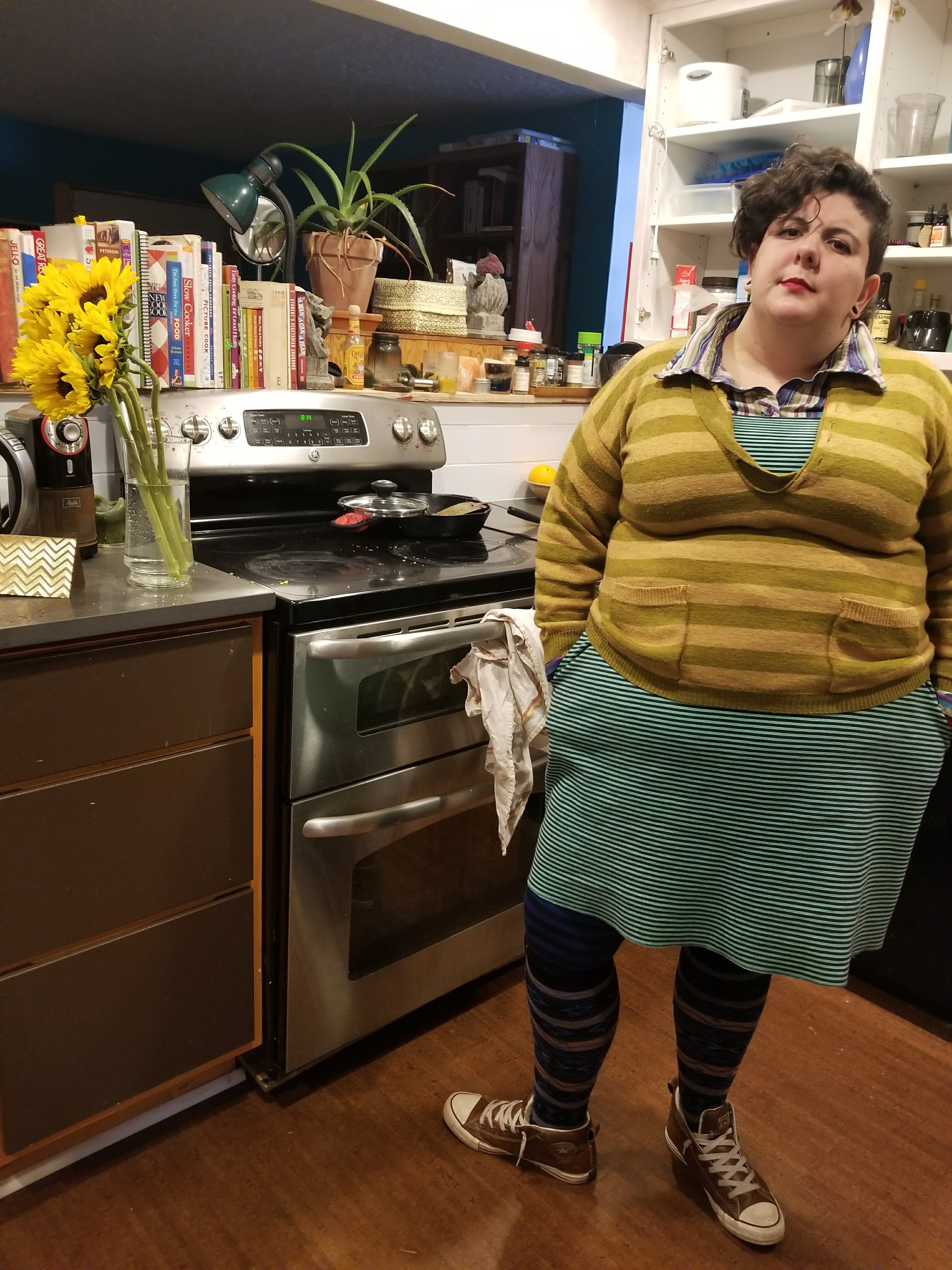 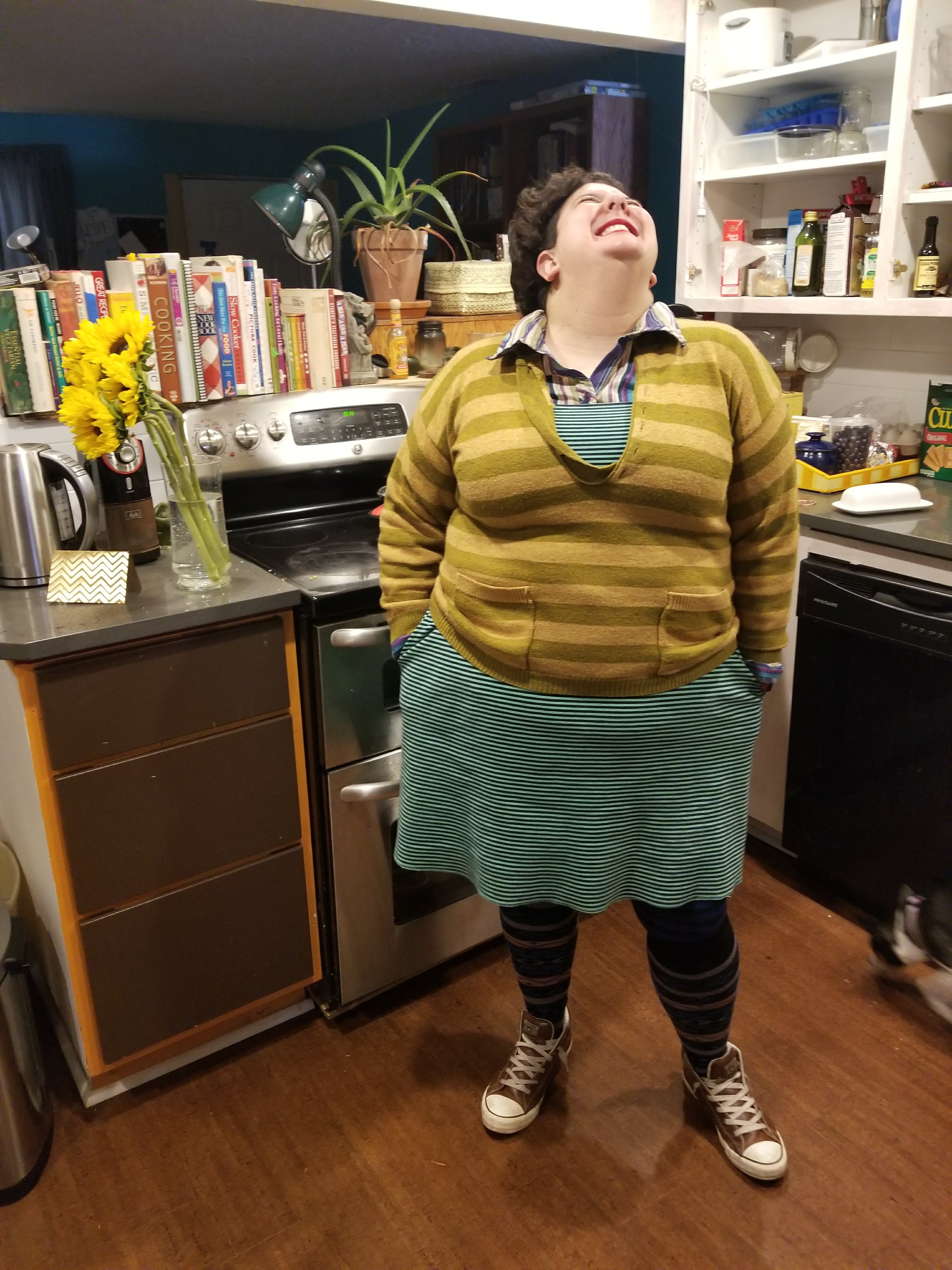 Sweater, dress and shirt are from Goodwill

Socks were a gift from my sister in law, Mara

Shoes are from Famous Footwear