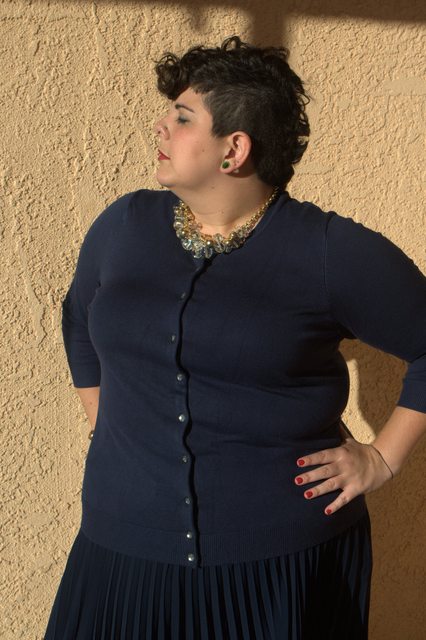 We were Mad Men people at work for Halloween, and since I spent so much damn money and time on the outfit (the make-up was a bitch) I also wore it the the Halloween party we went to the weekend before.

You can tell the pictures I took after work because my tights got ripped and had been removed, and the heels got replaced by backup shoes after a long day of running around. I guess it’s a skill you eventually learn, but being a woman in any era before flats were acceptable work attire (basically right now) took a lot of grace, and an extremely high pain tolerance. Neither of which I posses. Actually, I do have a high pain tolerance, but that doesn’t mean I’m cool with enduring pain for hours and hours when comfy shoes are also an option.

Red lips courtesy of Laura Mercier, Cherrywood – This was actually the second tube I tried, on loan from my friend Carrie. The first tube, Make Up Forever’s Moulin Rouge was far too pink. In fact, I used it for blush.

Gray coat is from the thrift store.

Necklace is from Macy’s can’t remember the brand

Sweater is Charter Club from Macy’s

Tank under the sweater is Gap

Cocktail ring was a gift

Skirt is Charter Club from Macy’s

Hose is from Macy’s