Yesterday I teased the sushi guide, and today here it is for your reading, viewing, and dining pleasure. I am by no means a sushi expert, in fact I would list myself as a 4 out of 10 when it comes to sushi knowledge.

This guide is meant to introduce you to sushi so that you can order with semi-confidence next time you’re out with some friends, or a date, or just yourself and a book. I make no claims to sushpertise or sushperiority.

BUT SUSHI IS GROSS! 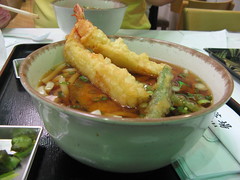 If you’re really afraid of sushi, and you don’t want to eat raw fish, like, ever, any sushi jount will probably still have something for you. Delicious udon soup is a popular dish that I recommend for those whose pallets run bland. The udon noodle is basically a big sponge that soaks up the delicious flavor of the broth, while the veggies and meats (different ones depending on which udon you order) are basically bonus food that you can pick out of the soup with your chop sticks and eat by themselves. There is also likely to be teriyaki plates, wontons, dumplings, and many more appetizing, non-raw fish foods for you to enjoy. So, no need to be a raincloud on everybody else’s “let’s go to sushi!” party, there is food there for you too!

OKAY I’LL TRY IT, WHERE DO I START? 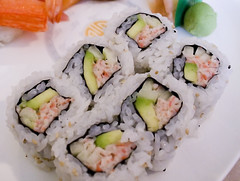 For those about to roll, we salute you. The first thing I recommend a sushi beginner do is pour a little soy sauce into the little dish they provide you, or into the smallest compartment or corner of your plate if there is no dish, then mix in small amounts of wasabi, tasting it along the way to ensure you don’t over commit. Gently dab your roll into this mixture before you eat it, it’ll add a nice kick to an already good thing.

Beginner rolls include almost all vegetarian rolls. They don’t have any intimidating fish parts in them, just rice, seaweed and veggies. California rolls and their derivatives (like the crunch roll, which is a CA roll built around a tempura shrimp) are another popular favorite. An intermediate roll you can try once you’ve caught on is a spicy tuna roll. It’s not one of my favorites because of the texture of the tuna, but spicy tuna is a very popular roll.

I’M DOWN WITH THE ROLL, BRING ON THE FISH! 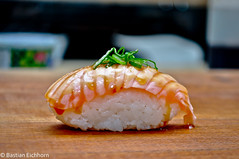 There are actually two different kinds of sushi associated with raw fish, but in all actuality, they’ve got a lot more to offer than just raw fish. Nigiri-zushi is the one where the fish is draped over the pillow of rice, and sashimi is just the fish by its self. In this section is where we come up against the 5-10 out of 10 that makes up what I don’t really know about sushi. What I do know is that I like red snapper, ono, salmon, and tuna. I’ve also enjoyed a lot of other nigiri-zushi that I had no name for at the time, either because I forgot, someone else ordered it, or because I picked it off a conveyer belt at a sushi buffet. 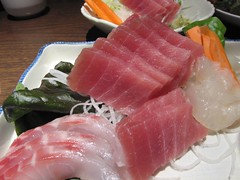 But this is what makes sushi so interesting for me. There’s so much more to learn and to eat! I always have fun when I go out to sushi with my friends or by myself. I have my own daydreams of someday being the kind of sushi bar regular that has a rapport with the chef. I imagine him or her introducing me to new creations and rolls and talking about food and life over mountains of raw and cooked sea life.

For anyone who like sushi, or wants to like it, feel free to comment. As I said before this guide is far from perfect, and I’m sure it could benefit from your input. What rolls do you like? Where do you go? Does the chef know your name? Let me know in the comments!