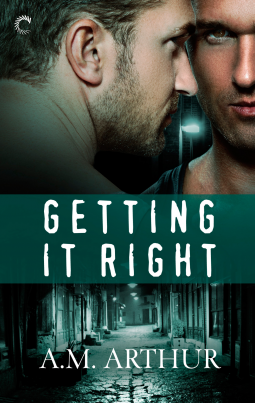 Getting It Right by A.M. Arthur

You may know Dr. James Taggert, or friendly club hook-up Tag from A.M.’s other successful books in The Belonging Series. This first book in the brand new Restoration Series is extremely promising.

Police detective Nathan and his psychologist best friend James have always been on the verge of something. Both have feelings for the other, each lives depressingly unaware of his friend’s internal struggle. James stays away from Nathan on the grounds that he’s straight, Nathan stays away from James on the grounds that James doesn’t like him back.

As Jame’s alcoholism progresses, and Nathan closes in on a career making case, the two friends fall into a drunken make-out session that leaves Nathan more sure of his intentions than ever, but black-out drunk James has absolutely no memory of the relationship changing event.

When a brutal attack leaves Nathan fighting for his life, then under the care of his parents, James is forced to come to grips with what losing Nathan would really mean to him. it’s time to grow up and stop playing at club boy if he wants a shot with the true love of his life. But will Nathan still want him when he recovers?

For his part, Nathan pretends that his avoiding James is all about getting better, but it’s also about keeping his distance from a man he’s always thought didn’t want him, and who he can’t imagine would want him now covered in scars and suffering from some serious trauma.

Where the Belonging Series were clearly young and new, the Restoration Series feels grown up and serious. I like it. I also like the transformation that the characters go through. Unlike other books I’ve read where one partner turns to the other says “gee honey, I wish you wouldn’t drink so much” and the book basically ends in a giant heart around them both as the other partner promises to do just that.

There are some things missing, for example, how Nathan could be in love with his openly gay male best friend for most of their friendship and neither bring it up, nor act on it with any other dudes. Or that he would also decide to repress these feelings despite having incredibly accepting parents and a gay best friend.

My arguments with A.M. books past that the author either didn’t access their own trauma, or didn’t know much about trauma are slightly assuaged. The portrayal is way more realistic than it has been in the past.

Otherwise, I approve of this new, darker direction.