Today was one of the many days where I couldn’t think of anything to blog. So, I asked twitter what to write about and my friend noarmsjames came though for me with this piece of awesome: 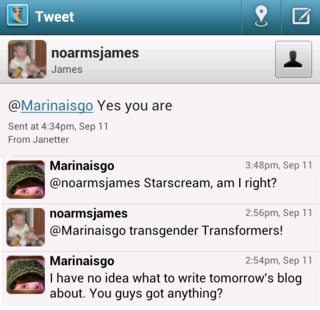 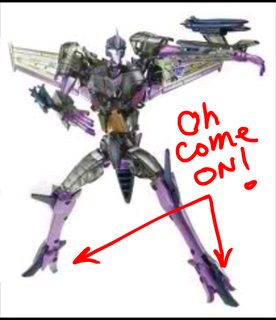 This actually isn’t my discovery, James Adomian retweeted a fan who tweeted this to him about a week ago.

Anyway, Starscream being a giant, evil dragqueen doesn’t necessarily mean that he’s transgender. As any gender advocate will tell you, gender bending does not necessarily indicate a desire to transition. Some queens are just fabulous; some boys are just girls, and visa versa. No big deal.

The idea of transgender people being like transformers works insofar as they are one thing presenting as another thing, at least until transition. I don’t actually know that much about Transformers, but I have a feeling that on whatever planet they come from, they’re not all running around pretending to be cars rather than being themselves all the time. They probably feel that they have to pretend to be cars in order to fit in with the rest of earth society. They probably think that the people of earth aren’t ready to accept giant robots into their society. And they may be right, which is why they stay closeted except to their fellow transformers and a few chosen allies, and they’ll never really know if their adopted planet could welcome them, the real them, with open arms. The world of a transformer really is quite small. Of course, the benefit to being a transperson, rather than a transformer is that 1. There are already a lot of other transpeople out in the world and 2. The government probably won’t try to capture and dissect you if you come out as trans.