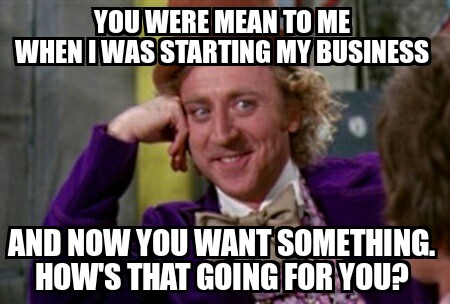 Ben and I like to say that if we had a family motto, it would be tit for tat. In game theory, tit for tat is the most successful strategy in the iterated prisoner’s dilemma, a game where you have an opportunity to cooperate or betray your fellow players over and over again. Players who cooperate at first, but promptly betray their betrayers while they continue to cooperate with their cooperators do the best over time.

When I was young, I thought that being mean to everybody on principal was the best bet. Later on, I thought being nice to everybody was the solution. I burned a lot of bridges and wasted a lot of time with both those strategies. Now there’s much less drama.

I lead with nice, but if somebody is mean to me, the nice train doesn’t stop at their station again, and that’s that.