Ben’s mom came down for the weekend to visit us and to see Zen master Thích Nhat Hanh, and she generously got tickets for us as well. Full disclosure, while I enjoy the idea of Buddhism, and that it’s probably the closest to my own spiritual discipline, I tend to avoid any kind of organized religion. No matter how pleasant it is. So I may write some things that seem critical of some people’s religious guy, but it’s really nothing personal. As a speaker, he was nice to listen to, he said some very wise sounding things, and I felt it was two hours well spent.

The talk began with a guided meditation, at which point I immediately started crying. This is because at 1:30 that morning we were all sound asleep in our beds when the most ear-splittingly horrible racket woke me up with my heart in my throat. The police were half a block away with their fucking megaphones on full volume ordering people to assume the position, and all I could do was peek helplessly into the street and hope that they didn’t open fire into the general neighborhood (again) and hit me or anybody in my house. On top of the jarring wake-up, my already healthy fear of law enforcement, and my insomniac tendencies, there’s the fact that my mother-in-law is in the next room and I’d just like to maintain any piece of the slightest idea that maybe I haven’t completely ruined her son’s life by making him associate with completely rotten street trash like myself. Of course, I had no idea that in the morning she’d say “Oh, I knew I was safe because the police were here.” I absolutely never occurred to me that the police might make anything better or safer. The very idea.

So anyway, when guided meditation started, I burst into tears because I’d stayed up until 4:30 am searching news sites and checking for gossip with my neighbors (apparently there was some gunfire and then the cops came and blocked the street) in a wild attempt to substitute knowledge of the circumstances with control over them. To no avail. And because we sold one car to fix another, because I have no idea where my life is going or what I’m doing, because I haven’t take the time to stop and breath since May. Because I just can’t fucking handle this right now and the only thing I know to do is just work until I collapse, then get up and do it all over again, and at no point does that kind of schedule facilitate deep breathing and mindfulness. Mindfulness is the enemy. Because if I had to live in this moment, I’d be here. In this moment. Where the worst part of my night isn’t the random fucking gun shots, it’s the trigger happy cops, jacked to dump hot lead into dog or man in any and every direction while blasting their megaphones and ruining my fucking fragile grasp on the last shred of my unemployed/freelancer/solopreneur sanity. I’m supposed to breath into my abdomen and take a fucking snapchat of my life falling apart? Fuck no.

Anyway, I took nine pages of notes, although the last two are mostly me trying to sketch Thích’s head shape. I never got it. My notebook looks like I have a crush on Piccolo from Dragon Ball Z. 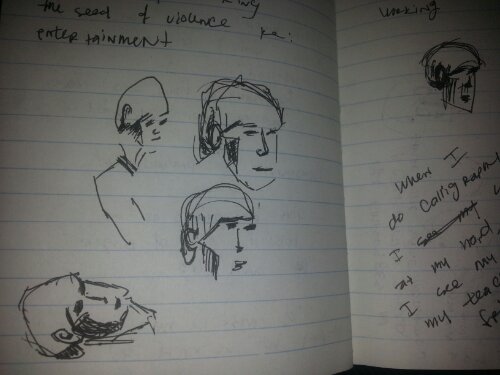 He talked about smiling and happiness. Which I was not getting at all. You guys are seeing my life right now. Happiness feels like foolishness.

He did, however, talk about compassion, which I can get behind.

We touch the suffering inside of ourselves to find compassion for ourselves and for others.

Usually when I am having trouble finding compassion for someone else, it’s because I’m working harder to ignore that we have a shared pain, or if I acknowledge that pain, I want to pretend that I’m not affected by it.

He talked about being in touch with our bodies. A lot of this was sound advice regarding not trying to run away from suffering, recognizing and nurturing our physical selves, and being aware of the miracle of life and living in any circumstance.

To be alive and to be mopping the floor is a joy.

He also compared eating meat to eating our own children, said that video games were poison, and recommended that people who live in bad neighborhoods move out of them (as if I hadn’t thought of that!). Two things dear to my heart and one thing vital to my circumstances.

I feel like saying that compassion and deep breathing is all well and good for the expensively dressed upper middle class crowd at the Pasadena Civic Auditorium, but I’ll call master Hanh for diet advice next time he finds himself in a Food 4 Less with his last $20 and a month of eating stretched out before him. Because I’ve been there. I also tried to be a vegetarian for six years and I got very sick for my troubles. I eat what’s available to eat. I live where my money can buy me shelter, and at the end of all that, if I want to unload virtual hell on alien cranium I fucking will.

It was very nice to sit and listen to this man’s perspective. I’m of an opinion that, in general, older people should always be listened to, especially if they come from far away. I enjoyed his take on suffering and mindfulness. But I think that perhaps this is a rich man’s game. One I look forward to playing someday.

In trying to escape suffering, in fear of it or anger over it, we create more for ourselves.

One Reply to “Thích Nhat Hanh at the Pasadena Civic Auditorium”