From second to eighth grade, I went to a private school in my home town of Altadena. I was probably the 3rd most impoverished person in that whole entire school, and my grandparents could afford to pay for braces and glasses at the same time, so it’s not like we were really hurting that badly. I was hurting, but in a braces and glasses way.

Because of the mean income of the student body, and the vigorous fund-raising we participated in, my class’s eighth grade trip was to Europe. So everybody who went to DC can suck it.

It was basically a normal 14 year olds with money on “The Continent” situation, until we went to Italy, our last country on the tour. Little did we know (and as far as I can tell, little did the rest of the world know – I’ve googled it and came up with nothing), 1999 was a year of civil unrest for Italy, and lucky us, we got to drive three hours right though the worst of it. In a bus with a broken toilet. In an area where we could not stop for fear of rebel soldiers coming aboard and kidnapping the rich American children for ransom money.

I was actually fine for most of the trip, although a little bit creeped out when we went through a military check point and a 17 year old with an M4 Carbine strapped to his back stepped onto our bus and stared me in the face, which made that the second time I’d seen a gun in real life. The first was when my mother’s boyfriend’s house/meth lab was raided by the SWAT team with me sitting in the living room. Needless to say, assault rifles and me had a dicey, if brief, history at that point.

Anyway, at some point my friend leaned over and told me that she really had to pee. We were an hour away from Rome, and I had to pee a little, but not as bad as she did. So I devised a plan. Nobody’s going to piss themselves while I’m around. I took out my watch, and I told her “Ok, we’re going to stare at the second hand, and not pee for 1 second, then we’re going to not pee for the second after that, and so on.” The friend agreed.

This was a terrible plan, or at least it was for me, because for 3,600 seconds, all I though about was pee. By the time we got to Rome, my “friend” was looking positively restful next to me. I was actually in physical pain I had to piss so bad. It’s like I took all her having to pee and added it to my having to pee in some sort of friend, Marina, eighth grade trip to Europe, broken bus bathroom, telepathic piss event.

When we finally stopped, the two of us ran off the bus and into the bathroom as fast as we could. Fortunately there were 2 stalls. Unfortunately, my time had come and I pissed in my pants while trying to get my belt unbuckled.

There I was, 14 years old, in a foreign land, with all my classmates in a bus 10 feet away, and a serious case of adolescent pee pants. Suddenly, genius struck. It was summer in Italy, the weather was exceedingly warm, and through the crack in the stall door I could plainly see a trough sink. I jumped into the sink, turned all the taps on, soaped and rinsed my pants, and made sure that the rest of me got good and soaking wet.

When I got back on the bus, my teacher asked what happened and I told her the toilet ate me. “Yep. It just jumped up and ate me. It was the craziest thing, and frankly, I am lucky to be alive.” At this point in my life, I had gone from glasses and braces and PTSD level social awkwardness weird kid, to funny looking clothes and novelty backpacks and saying and doing strange things for the hell of it weird kid. So nobody batted an eyelash. My teacher threatened to send me home, I looked contrite and that was the end of it.

To be honest, I have no idea if anybody realized I’d peed on myself. At the time I thought I was an Einstein for thinking that up on the fly, but in reality the entire class probably has another story: The Time the Weird Fat One Pissed Herself in Italy, and She Thought Nobody Knew. I’m sure it’s a hit at parties. I know my version is. 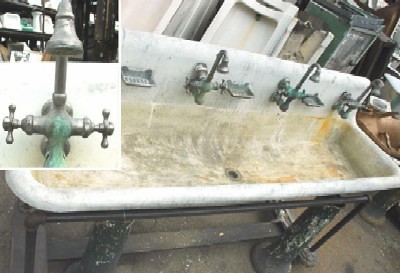