Ok, it’s been about 6 months since this happened so the chances of her finding this seem somehow closer to zero now than it did six months ago when I really wanted to write about it but didn’t. You know what? I should have done is write about it when it was fresh, saved it as a draft, and then publish it 6 months later. I always think of the best ideas after the fact. Well, next time. Also, this is TOTALLY FICTION and NEVER ACTUALLY HAPPENED. EVER. 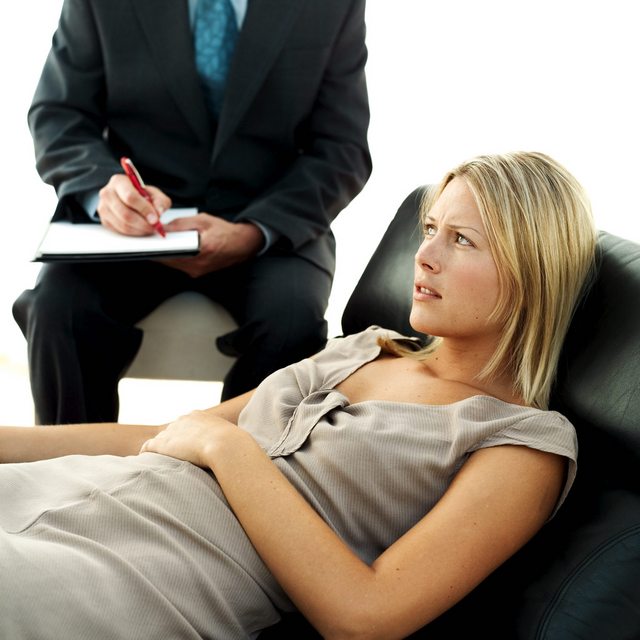 So, in this fictional world, I started experiencing episodes which were later diagnosed as Depersonalization Disorder. In a panic, I searched for a therapist covered by my insurance and found one in the building where I work. How convenient, I thought, I can go on lunch!

I do not recommend.

At first, new therapist was awesome. She diagnosed my disorder, which made the one bad episode I had after I started seeing her a walk in the park compared to the blind, sweaty panic-fests they had been. But as we got to know each other more, things got a little contentious.

It started when, in one of the first sessions, I mentioned to her that I was a member of a 12 step program, and she told me that she didn’t really believe in that stuff, but that she respected my decision to believe in it. Not that I asked her. At the time I basically thought, ‘Well, I wanted another perspective, and here it is.’ But that was kind of a red flag since the 12 steps inform so much of my life, and her acting like I’d just confessed to calling the Psychic Friends put me off a little.

After I told her about my program, the last 15 minutes of every 45 minute session were devoted to her telling me how ill equipped the 12 steps were to deal with my problem. Um, if I thought the 12 steps could help me with depersonalization disorder, I’d be at Depersonalization Disordered Anonymous right now. The very fact that I walked in the door of her office means I’m admitting that my program is out of it’s depths. Why are we wasting a third of the session rehashing how much you disagree with me on one aspect of my life that has nothing to do with you?

This became especially annoying when she started telling me that I should have never done a 9th step (the one where you make amends to people you have harmed) because I was a victim and therefore not responsible for my actions. Which is a complete load of horseshit. I was a victim for the period of time that a crime was being perpetrated against me and no longer. She didn’t see it that way, although I have a hard time believing that any adult would subscribe to the belief that things a person does at any point after being the victim of a crime don’t count. I guess she thought that they counted, just that I shouldn’t apologize for them? Which opens a whole new can of worms. If child abuse absolves me of my need to take responsibility for my actions, than no one in my entire family is responsible for their actions!

Then there was the time that I’m pretty sure she antagonized me on purpose so that I would have a depersonalization episode. Thanks to her diagnoses it wasn’t bad at all, which may or may not have been her point, because she was trying to illustrate to me that depersonalization was something I’d always done and I only noticed it when it became inconvenient for me. I guess that’s good, except that when I went back to work I was completely useless for the rest of the day. It’s hard to focus on your job when all you can think is ‘this isn’t real and it doesn’t matter at all.’

Then there was the time I left her office thinking that I had no real friends because she told me to list my friends in order of importance and I couldn’t do it. So she said “if you don’t have any friend that’s more important than any other friend, than do you really have any friends?”

The next week, after talking to some of my apparently nonexistent friends about how just because I don’t think anybody’s more important than anybody else doesn’t mean that I don’t have close friends in my life that I confide in more than others, not because they’re more important, but because they’re closer to me. I guess it’s just semantics, but when I brought it up to her that the last session left me feeling like I didn’t have any friends because I don’t consider them more or less important, but rather closer or nearer, or maybe sharing certain qualities but not others, she was like “so why do you feel like you don’t have any friends?” As if I’d just manufactured the no friends thing and this was the first that she’d heard of it! Then our 30 minutes was up and she told me how stupid the 12 steps were until I had to go.

The final straw for me was when she started “analyzing” my relationship with my boyfriend, coincidentally the only thing in my life at the time that wasn’t causing me grief. It was all very similar to the time I took the car in for transmission problems and the mechanic fixed everything else for 6 months until the transmission really did go out and I spent all my transmission money on shit that wasn’t broken.

First she wanted to know why we weren’t engaged after 8 years. I told her that we had talked about it, that we actually frequently talk about it because marriage is a thing a lot of our friends are doing, as well as a thing we get pressure to do from time to time. I said that the conclusion we’ve come to every time we check is that we don’t see any value in the institution, we don’t want to waste money on something we don’t even believe in, and at 26 (at the time, 27 now) we were both far too young to be getting married, even if we wanted to. In fact, I said, we’d basically agreed that there was no reason to marry until kids were on the horizon. Not because parents should be married, but because that would probably facilitate adoption, which has always been my plan for children.

After listening to all that she said “Yeah… but don’t you want to get married?” She dragged out the word “yeah” and “want” while nodding her head like she was trying to hint the right answer for me. Having said all I had to say on the subject, I again told her no, I do not want to get married. “Yeah, but when you go to a nice wedding, don’t you sit there and think ‘oh I wish that was me?'” Again, with the nodding, like I’m failing a test. I told her that I’ve been to some very nice Bar and Bat Mitzvahs, at no point did I want that to be me. You can experience a nice ceremony for someone else and not have to have it for yourself. She seemed unsatisfied with my answer, but unwilling to try a fourth time.

With the marriage issue thoroughly beaten to death, she then moved on to finances: Did Ben and I have a joint bank account? No, we don’t have enough money to spread it around three bank accounts, but the plan is that when we’re in a position to do major saving, like for a house, or for vacations, we’d get a joint account and put the money in there. “Why not put all your money in one joint bank account, no separate accounts?” Who the fuck would do that? It’s a book-keeping nightmare, I can barely keep up with balancing my own checkbook, now I’d have to balance for both of us? (Ben’s personal accounting practices kind of appall me, so he’d not be allowed near any joint account of ours.) Besides, we both have different banks. I hate Chase and will never give my money to them again, and he’d have to come up with about $150 in order to do what we want to do at my credit union. Added to that, there’s only two locations, both of them far from our house. “Why don’t you guys get a savings account at a third bank, and just make that your joint account?” Because that would be insane! We’d be unable to transfer funds between the 3 accounts, so we’d have to drive to an ATM whenever we wanted to put money into our savings account, where we’d inevitably have so little money that it would be eaten up with banking fees and that’s totally stupid. I picked my bank because it is literally 400 feet from my desk at work. Why would I want to fuck that up?

Finally, the session was over, and she was like “we’ll talk more about this next week.” Oh. My. God. There is no way I’d want to delve deeper into why my perfectly healthy relationship with a man I love and communicate with, who understands me and supports me is actually shit and I just don’t know it. My next session with her was my last.

I had told her ahead of time, so instead of spending the last session talking about what worked and what didn’t work, she tried really really hard to convince me that I was completely unstable and super needed help, and shouldn’t leave her and in fact should see her twice a week instead of once. While she succeeded in scaring me a little bit, she mostly just made me hate her more.

So far I haven’t seen her in the elevator or anything, but I still dread it.

5 Replies to “The Time I Fired My Crazy-Ass Therapist”