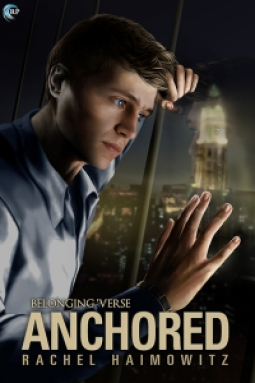 Riptide does it again. There’s no wrong way to go with these guys, is there?

Anybody who doesn’t have a stomach for violence, or for alternate universes where basic human rights are not only not a thing, they’re kind of a new idea altogether, should not read this book. There are horrific beatings, and violent rape, although they’re not told in such a way as to be arousing, unlike some other books I’ve reviewed with varying degrees of approval.

Anchored is one of two books set in a universe where slavery, specifically Western slavery, where slaves have no rights, was never made illegal. It is an extremely dark look at the notion of privilege, ownership, and power, and how those things can influence relationships. A psychologist would have a field day with these characters.

Daniel is a successful news anchor and lifelong slave, owned by the corporation who produces his show. When the flagging network turns to “leasing” him out nights and weekends, he can only be happy that he’s been leased to one man, and not hundreds, like some other television slaves.

Carl buys Daniel as a companion, not only because he’s admired him on TV, but also because he’s a fellow news man, and thinks Daniel would be a good friend outside of the bedroom. His complete lack of insight into the horrors of slavery was familiar to me in that I’ve seen the same shocking obtuseness in some of my #notallmen friends. To a much smaller degree, both situations tend to look like an otherwise good man trying, and mostly failing to peer across the veil of culture to see the very real divide between himself and someone he would have as a fellow.

Daniel is terrified of getting fucked by his strange new master, and the man’s inability to see his reality comes across as either cruelty or idiocy more often then not. Something I’m sure a lot of us can relate to. Whether they can get along, whether they can provide any small comfort to each other in a world so stratified, is yet to be seen.

This is the second edition of Anchored. Riptide has revised it, and added more than 10,000 words, which sort of makes me wonder what it was like before. The emotional twists and turns that a person is required to make in a situation where he does not have the right of choice are on display, as are the issues we find when a person of privilege tries to relate to someone on whom that privilege is built. It’s by no means perfect, but it’s amazing in it’s own right.

The scope of Anchored is broad, and the emotional landscape it lays out is a veritable mine field, but but it succeeds in being an extremely compelling and provoking thought-experiment that tries to answer the question: Can a slave truly love a master?

Because the only context I have for this is, of course, my own reality, I ended up interpreting a lot of the interaction through the lens of privilege, and to that end, this is a fascinating read all around. Every character is so real in their imperfection, in their raw humanity, that they could be people I know in my own right. When another, wise and maternal slave advises Daniel that it would be better for him if he resigned himself to what she regards as his sexual obligations to their master, I could almost hear my own mother and grandmother speaking in that moment. Her own history, and her own experience keep her a sympathetic character even after this horrific mutation of the birds and the bees talk. For this, and for so many other reasons, this book is a must-read for anyone who can take the violent, disturbing nature of the content.

Ultimately, things get a little too poly-anna for my feminist heart, but I also wasn’t outraged by the turn, and I could easily see myself being pissed had things gone another way. The fact that there is about 50% of a happy ending was, I think, a good choice given the venue. On the one hand, there’s no way a writer could have been so flippant as to give a life-long slave a happy ending, on the other hand, there’s no way a writer could be so cruel as to not give a life-long slave some kind of happy ending. Basically, I ain’t mad.