Hey guys, It’s 1 am, so this’ll be quick. I had a great Thanksgiving!!

I mentioned it before, but this year we put the word out that anybody who wanted could come hang out with us. I honestly wasn’t sure what to expect, and at first I was like ‘OMG, what are you doing, you only own 2 plates!’ But then I was worried that no one would come, and then I cleaned furiously for 2 solid days, and people came over and it was awesome and I’m exhausted and happy.

For the plate solution, I bought paper. Sorry Earth, this isn’t your day, and you didn’t just finish cleaning an entire house with your severely winter dried hands. We ended up with a total of 6 people in the living room, including Ben and Me. Our couch can actually hold 4, so everybody fit with the simple addition of an office chair and a camp chair. Although for most of the night there were only 4 of us.

I learned that Saturday Morning Breakfast Cereal has a mysterious red button on it that pops up an extra panel if you mouse over it. 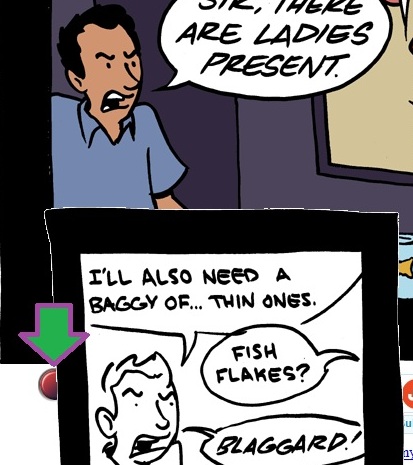 After that I had fun inventing falsehoods about Oregon. Namely that the only animals in the state are various species of Beaver, that they use sea-shells as money, and something else that probably had something to do with trees, since there are so many up there.

We also talked about how every Start Trek Captain is more competent than the last, and that Janeway is a reward to female Star Trek fans who have had to suffer decades of Uhuras and Trois and even Daxs. We finally get a competent, strong, intelligent woman who doesn’t take shit from anyone, but isn’t a bitch about it.

Anyway, it was nice to have some engaging conversation. It was largely dork speak with about 20% reminiscing. It’s fun to tell old stories again sometimes.