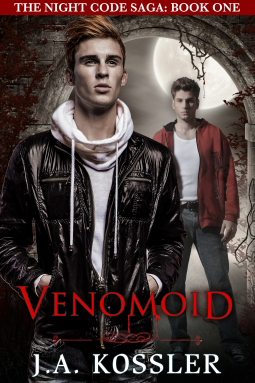 Thanks to Netgalley and Riverdale Avenue Books for the review copy.

Teenage vampire cop Lorin lives in a dangerous world. His duties as an enforcer for the IPO make him an enemy to his own kind, and his non-human status within the very organization he serves give them carte blanche to kill him for any reason, up to and including a poor performance report. To add insult to injury, the only way an adult vampire can be allowed to live, even as non-human non-citizens is if they become “venomoid” through the surgical removal of their fangs and venom glands.

His life gets even more complicated when he meets Lex the zombie, a member of a newly discovered unkillable race of hunters who must devour living human flesh in order to maintain their sanity. As you might imagine, it’s love at first sight, and the two quickly begin planning their life together. Away from the IPO, and away from the zombies and their strict tribal hierarchies. But will the villains on either side of what passes for law in these parts really let them be happy together?

Every couple of years women in the West will remember that women in other parts of the world endure the ritual removal of their clitori in various stages of horrific and gorey agony, and there will be a spat of articles written about it. Many of them detailing, not only the process of the operation in great detail, but the culture that makes it okay, and even the hours or days leading up to it. I have to say that this book reads eerily similarly.

Reading this book was like reading one of those articles, just waiting for the proverbial (and sometimes literal) ax to fall. It was fucking tense.

Outside of the physical and emotional oppression through cruel and unnecessary surgery storyline, I was nonplused by the rest of the plot. Not to spoil it, but there’s a pretty serious emergency event that the main character tries to solve through none other than grassroots activism, which is just weird. It’s the equivalent of trying to cure a venomous snake bite through a careful plan to fund the preservation of the natural habitat the snake would have lived and hunted in, far away from bite-able people.

It’s saccharine sweet. Which works in it’s favor, especially considering the fact that so many horrible things happen to this poor kid. But I can’t help but think that if somebody had flattened out the peaks and valleys and replaced them with character development, this would have been a much better read.