Because my sweet boyfriend Ben has been working like crazy lately, our sex life has not been as robust as it usually is. So instead of being understanding that the poor man is exhausted, I had a total breakdown and became convinced that it was the end of our sexual relationship forever.

This isn’t the first time I’ve done this. I’ve had a habit of having this exact same anxiety attack every single time we went more than a week without sex. First I worry silently to myself that he doesn’t want me anymore, then I try to initiate sex even though he’s just said he’s too tired to brush his teeth, then I ask idiotic questions like “will we ever fuck again?” and make idiotic statements like “If you’re tired of me, you should tell me so I can move on with my life.” Then I make him tell me that he does still want to have sex with me, just not right now.

Imagine this happening at least once a month for every month of your relationship. The man’s a saint.

After eight years of continuing (actually improving) sexual satisfaction I’ve been able to lengthen the amount of time I can go until the no-sex crazies from one week to two. At this rate, by the time we’re too old to fuck I should be able to hold out until one of us dies. Hooray.

Mid-week, I get an idea that I want to have a Dance Central 2 dance party and photograph it for my weekly GearedforGamers.com article. So I make a Facebook event, immediately get Big Ben on board, and then spend the rest of the week watching the decline notices come rolling in. Friday night, Jono says he’s coming, so that means I have 4 people including the boyfriend.

The next morning I learn that Big Ben can’t get there until 3, and by ‘get there,’ he actually means get picked up because he lives in New York and doesn’t have a car. Then my (again) saint of a boyfriend confesses to me that he feels terrible and he doesn’t want to go to the party, and instead might leave the house because he’s so fucked up from work that he can’t imagine being a host.

Meanwhile, Jono is already on his way and the ‘dance party’ is going to be me and him and no one else. While he’s driving, I’m alternately texting him, texting Big Ben and talking to my boyfriend. My anxiety level is rising, and at one point I try to cancel the whole thing, but that makes me feel even worse because then I don’t have the first inkling of what to write and it’s already Saturday. I know I can write about how sexist Tomb Raider is, but that’s a dead horse the entire Internet already beat to shit.

Eventually, I realized that I was over-reacting and decided to just go with the flow and do whatever feels right, and everything worked out. Turns our my Ben was so exhausted that he slept through the entire party, Jono and I went to pick up Big Ben and get lunch, everything was super fun and drama free and everybody had a good time. Mostly…

The third and final reason why I should be ashamed of myself today has to do with both of the previous reasons. Due to reason 1 I made a complete fool of myself at reason 2.

After the dance party had calmed down, and we had all gone to the beach and came back to the house again, my sweet boyfriend was finally awake and sitting on the couch. Because of the crazytimes inside my head, I got the idea that it would be sexy, and smooth to straddle my boyfriend in front of my friends and exclaim (while stuttering) that I was his “20th century boy.” If that wasn’t gross enough, I missed my mark and kneed him in the balls, which caused him to shove me off his lap and the couch. Of course I was wearing a miniskirt, which made everything so much more awful than it already would have been. Especially since Big Ben was sitting on the same couch at the same time that all this was going on.

I think this is why people drink. So when they do things like this they have something to blame.

Nope, this was all me.

Oh, I almost forgot this one. In a discussion with Big Ben, I used the trump card of “well, one time some asshole tried to choke me to death, so I think I know a little bit about life and death, OK.”

Also, WHY DID I COMMIT THAT COMPLETE LOGICAL FALLACY JUST TO WIN AN ARGUMENT THAT HAD NO CONSEQUENCE?! 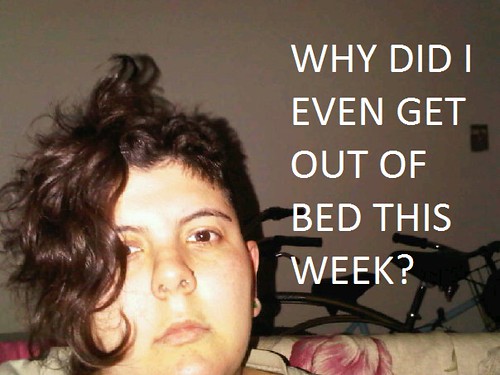 I seriously can not believe I have friends right now.