The other day, Internet citizen and all around popular guy Matt Inman, proprietor of TheOatmeal.com posted a comic about being a content creator which you can read here.

At a certain point, he says that if he were to try and different create something new every day, it would eventually turn to shit and everybody would hate him. 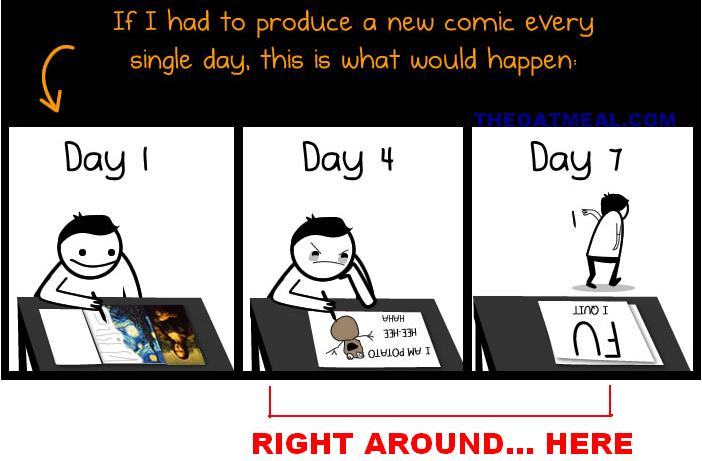 It got me to thinking, of course, about my own experience as a person creating things for the web. In whatever diminished capacity one can deign to call what I do “creating.” As you probably know, I am the type of unrefined monster who would update every weekday. Sometimes I joke about the quality vs. quantity break down. Ironically, that post is one of my favorites, and I think it’s exactly because I wasn’t feeling pressure to be polished that I was able to relax and write about what was actually a pretty stressful day without making it too heavy or boring.

Whatever else is wrong with me, I’ve always known that I’m an entertaining person. I think that part of that is growing up in isolation and having to keep myself occupied, and part of it is being the type who uses humor to cope with difficult situations. But when I get all stressed out about saying something significant (as if), I tend to lose a lot of what makes me entertaining in the first place.

Awhile ago, I realized that my personal journal was a really depressing place. Because I only wrote in it every 3rd month, when I was having a really hard time with something and I needed to work it out on paper. I also realized that this guy was pretty fucking boring. It was pictures of my outfits, which were cute (but whatever), and whining about my mental health. Ugh. Somewhere along the line, I lost a lot of my humor, and I think that coincided with me trying to write ‘quality’ posts.

There’s something about trying to be polished that tends to makes a person start to look suspiciously like the least offensive parts of every other person in the world. This isn’t something I realized before I was updating every weekday. I just knew I didn’t like my creative output, and I needed to do something differently in order to shake that up. Without weekdaily updates, who knows when I would have figured the rest of this out. And there’s way more coming, I feel like I’ve only scratched the surface. I spent so many years writing for everybody else, sometimes literally, like when I was in school, or when I was a copywriter, but also writing with the idea of a reader. What I thought they’d want to hear, to read, that I almost lost my voice. Choosing quantity over quality is helping me find that again, and cultivate it into something real and useful. What do I actually write like? In what situations do I produce my best work? What kind of work do I want to produce, rather than what works best or what sells most? The only way to answer these questions is with data, massive fucking piles of it. So I’m doing that.

This is not to say that Mat Inman is doing it wrong, obviously he’s got something awesome happening where he is. And I don’t think weekdaily updating will be a theme of this blog forever. Things change all the time, who knows what kind of life I’ll have a year from now. But there are as many different ways to produce creative content as there are people to produce it. I’m finding that this schedule is nourishing to me. Frequently, the days that I sit down thinking “I don’t have anything to write about” are some of the posts I end up liking the most because I’m not trying to be special. I’m just letting my brain take it’s natural course.

I still happily subscribe to the Ira Glass school of creativity, which is basically make fuck tons of shit, don’t get discouraged and don’t stop. I’d have to say that this philosophy has served me well. Even before I heard him say this on his show, I suspected that action, rather than innate talent was what separated a lot of successful and (more importantly fulfilled) creatives from the unsuccessful (and unfulfilled) ones. 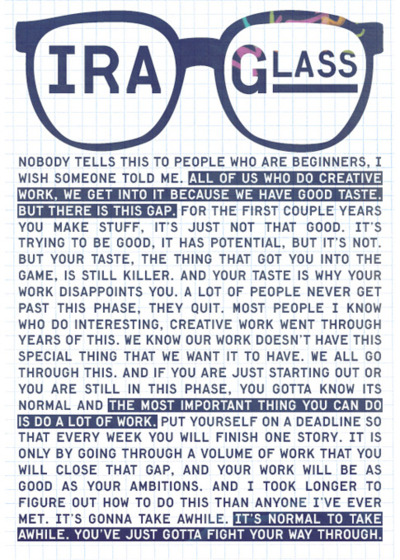 Ultimately, I’m not Mat Inman, I’m not popular, or established. I can’t wait several days or weeks in order to birth something precious, because nothing I make is going to be precious. I think that the issue a lot of creative people have is that we like to think we’re special, that our work is groundbreaking or significant. Chances are, nothing I make will be especially magnificent, and that is a huge fucking relief. Part of writing so many updates means I don’t have to be great, or even good. I just have to be as much myself as I can possibly stand to be. I think that’s a lofty enough goal for the moment.

While I was thinking about creating and creativity, Hank Greene from the Vlogbothers posted this. And I just sat there thinking, well drop the mic. This post is done.

4 Replies to “Because Quality is Overrated”