So remember last week when I wrote about how my debit card was stolen, but that’s ok because all I have to do is change my passwords, take a temporary vacay from my checking account, and fill out some forms? Well, just kidding.

I showed up at the bank this morning ready for my vacation to end with all my forms filled out exactly like they told me only to have my favorite teller ask “and where’s the police report?”

Turns out, in addition to the other stuff, I also had to go to the police station nearest my house and file a report, which I would then bring back to the bank before they’d start the process of getting my money in a week to ten days. Oh, you mean the police station that I was just chilling, playing video games next to all fucking weekend, the one I am now an hour away from with no option of returning to until the very end of the day? That police station?! Why the crap did none of the three people I talked to when this mess started last Tuesday tell me to get a police report? Even after I asked them “and that’s it?” Favorite teller had no answer, and really it wasn’t her fault, she wasn’t the one who told me what to do on Tuesday.

Thankfully, the Hawthorne Police Department closes at 9, so I can get there Wednesday. But that means the process for getting my stolen money back won’t start until Thursday, and I probably won’t get it for another 10 days after that. I’m not in a bind or anything, I actually can wait two more weeks, I just really don’t want to. I wanted to have this whole identity theft thing behind me, and it drove me crazy that I could have taken care of this on Saturday instead of having to wait two more days for my schedule to clear enough for me to be in Hawthorne before 9 p.m.

Normally, I’d be home before 9 on a Monday, but I had to work late in exchange for the 3 hour lunch I took to get my eyes checked. Which is where I learned that I have nearly 20/20 vision, but that I could still use something to help my eye-strain from near-constant computer use. And that I’m allergic to the stuff they put in your eye to test the health of your corneas. Apparently it makes my cornea wrinkle. It cleared up by the end of the day, although it made driving back to the office a little blurrier than usual. No worse than a high-smog day.

Oh, and as I was walking back into the office some guy started yelling at me from a block away so he could ask me if I was born in September. I shook my head, so he yelled what my sign was and I told him Capricorn. “You’ll do great in business” he shouted. “Capricorns always reach their goals.” I yelled a thank you and walked into work where a lady in the elevator promptly told me that my outfit was ‘interesting’ in the way that means she did not approve. 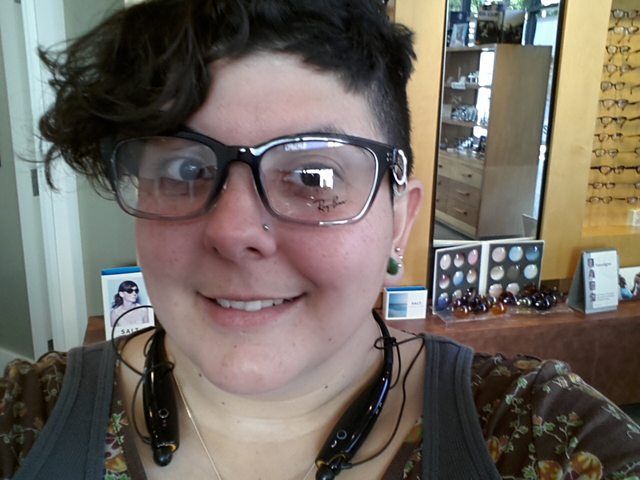 Here’s my dorkaliscious ‘new glasses’ selfie. I don’t get those back for a week either.