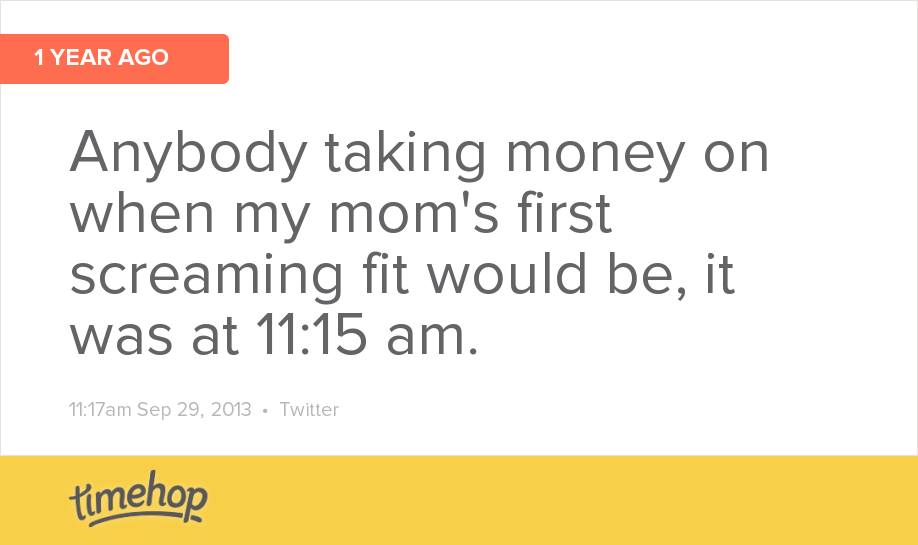 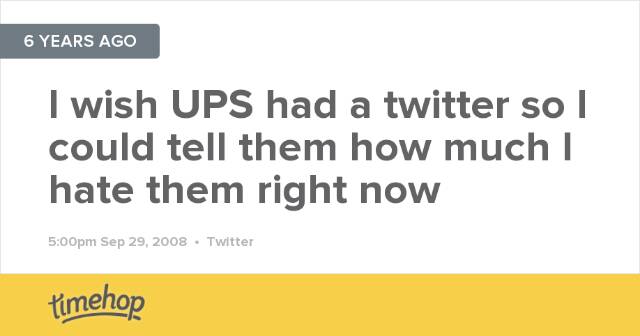 … but that’s not really the point. The point is, I posted that one about the screaming fit on Facebook and friend Becky asked if there was going to be a one year update, which sounded like a better idea for a blog than what I had, which was nothing. So…

One year ago, my grandma moved to Wisconsin. The day before, my mom had a screaming fit, and Ben and I hid in the yard, then left early because we’re not the kind of people that do well with screaming fits. I wrote about it here, if you want to read more about the day in question.

Since then, I talk to Grandma on the phone about twice a month. She says that she has nothing going on, and the last time I told her about my work, she expressed concern for my ability to cope, so we don’t talk about work right now. And since I don’t really do anything but work, we don’t seem to have much to say. Unless someone else in my family does something stupid, then we have hours to bitch about how dumb they are. So our relationship hasn’t changed much.

I miss her horribly. I’m glad she moved away from LA before I did because I think if she was still living there, I might not have left. When I call her, she says she’s unhappy in Wisconsin, but that’s hard to take seriously, because she was unhappy every day she lived in LA, so I can’t tell if this is a new level of unhappiness, or if she’s basically normal.

Uncle says that she’s happier there, and she might be. It seems like she’s definitely doing more stuff, if that’s any indication. I do have a feeling that the earnestness of the mid-west is not her style. I don’t think she’s met anybody who appreciates her acerbic wit, which is a shame.

About 5 months after the screaming fit, my mom called me to apologize for it. Well, mostly to apologize that I was bothered by it, not for doing it. Which is basically my entire issue with her boiled down to one non-apology. She practically said “I’m sorry you’re such a little bitch.” As far as I could tell, she felt completely justified in screaming at the movers, who had nothing to do with anything, because she’d decided to disappear for most of the morning, and while she was gone, my uncle had done something to wrong her. Then she felt like I should just understand and not be affected by it because she wasn’t mad at me (this time.) Alcoholic logic, at it’s finest.

Since then, she texts me things. Mostly passive aggressive statements that I took a lot of time trying to respond to perfectly at first, but now I just ignore them if they’re shitty enough and/or don’t have a question in them. There was a big drama that sent fallout all the way to my grandma and my cousin when she asked permission to read my blog, and then I ignored the question. I tried to reply in a way that wouldn’t make more drama, realized that was impossible, so just didn’t answer. I guess if she’s reading my blog she’ll see this. But whatever.

My dad knows about the blog, as far as I know he doesn’t read it. It came up that I have a blog, he asked for the URL, I gave it to him, and then I warned him that I speak very frankly about sex. He made an ick face, and as far as I know, that was the end of his curiosity about my blogging life. Ben’s mom has told me that she skips the sex parts. Ben’s mom’s friends have said that they love the sex parts. That’s cool. That’s why they’re there. That’s how you read your kid’s blog without being weird about it. Take what you like and leave the rest.

Not my mom, she had to send this really strained series of texts, first saying she’s read the blog, then claiming she didn’t even know how to get the blog, then asking if she could read what I said about her as a form of punishment for being a bad mom, then when I didn’t answer her, I heard from at least two family members that she’d gone to them with the drama. I don’t write this shit to punish my mother. I write it because when I do write about her, I get messages from people who went through the same thing saying that reading about me makes them feel less alone. I write about her because it helps me sort it all out in my head. Anything I say about her has nothing to do with her. Which is the problem.

A lot of her passive aggressive texts are about looking for me to absolve her, or validate her. Same old shit, really. I spent years absolving and validating her. I’m done. That’s all she wants, and that’s one of the many things I no longer have to give. We appear to be at an impasse.

So, I guess that’s the synopsis for the last year. You guys all know I moved to Oregon, and that I’m building my freelance business. That’s what 90% of my life is about these days. I know the blog has suffered for it, but I also think I’ve written some of my best commentary in the times when I do pull my head out of my ass enough to look around at what’s going on.

I miss my grandma, but she seems to be doing relatively fine out in Wisconsin. I’m glad she’s healthy because we are in no position to fund a visit, and it sounds like she’s having trouble coordinating any travel outside the state herself. One of the reasons I’m working like a daemon is to be able to afford to visit her in the near future. Neither of us is really very good on the phone. I’ve learned to be better in recent years, but she is really bad at it.