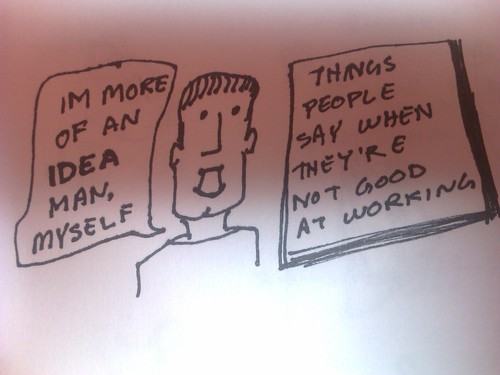 Smart and creative people tend to think we’re special, we say things like “I’m more of an IDEA man, myself,” and we are completely serious when we say things like that. Other than being a huge truckload of horseshit, the concept of being ‘an idea man’ only works when your ideas are good, and unless you have several floors of cubicled minions to test those ideas for you, you’re going to have to do some LEGWORK to figure out if they’re any good. In terms of what this planet needs, the ratio of IDEA men to LEGWORK men is about one million to one in favor of legwork.

Not every actor can be Joseph Gordon-Levitt, or whatever hot-n-totty the children are a abluster for these days. For the rest of the cast of Bowlingbrook Montucky JV Senior Cheer Squad, there is LEGWORK. Learn how to wait tables, or deliver packages by bicycle, or do voiceovers, because you may think you’re G.I. JOE material, but you’re going to have to prove it before they bring you to rehearsal and sit you next to Marlon Wayans.

And that’s the sad little boat every IDEA man finds herself in. There’s a million more like you, whose daddy told her she was special, vying for a space at the top of the cube pile, wondering why no one will notice their glory. The reason no one cares is simple: no one cares. Out of the piles and piles of IDEA men in the universe, the lucky ones of us only have one daddy, the rest of these bastards don’t even have that.

Obviously my own dad knows I’m awesome, hopefully at least one of your parents or guardians felt that way about you too. But nobody else gives a half a dry, white shit. All of us who walk around with great ideas hemorrhaging out of us like a homemade tracheotomy need to find a buddy and learn how to do the LEGWORK. Chances are your legwork buddy has great ideas too, and nobody ever told them they were worth anything. Teach your legwork buddy to believe in their creativity, and get them to teach you how to get your hands dirty and how to not be a douche.