One time, when I was about 16 and on vacation with my dad, I found some other kids my age, and was off getting fingered by one of the boys for before I realized quite how late it was and hurried back to our hotel room. Thankfully, I could practically feel the seismographic impact of my dad’s famous snore from outside in the hall, so I assumed that I dodged a bullet, and moved quietly to my bed. 1 foot from my goal, dad stopped snoring, and without moving his head or looking around, he said “MARINA! It is 3:47 in the morning. I don’t want to know where you were, but if you come back later than midnight for the rest of this trip, I’ll tie a string around your wrist and hook you on my belt loop and you will go EVERYWHERE with me. I’ll tie your ass outside the men’s room door, do you understand me?” I said yes and he went straight back to sleep. The marines teach you crazy shit like that. He can also say he’s going to sleep for 15 minutes, immediately fall asleep and wake up exactly 15 minutes later totally of his own accord.

I always wanted to learn cool stuff, but instead I went to college. I mean, I guess I learned some neat tricks there too. I can ‘read’ an entire book in 40 minutes or less and speak eloquently about it’s themes years after the fact. One of my favorite books in the world is George Washington Gomez. I’ve written multiple, well graded papers about it. It’s probably the most influential book in my life after 1984 and I have never actually read it in any real sense.

I can also take notes while mostly asleep. The trick is to lock your consciousness to the pitch of the professors voice while blocking out the content. As soon as they pitch their voice up, don’t think, just write whatever they say. Move your hand to the next line, and sink back to sleep. Repeat. You can get a pretty decent nap, and some passable notes at the same time. The key is that people pitch their voices up when they make salient points. Because of this practice, I can also take legible handwritten notes without looking at my paper, which apparently freaks some bosses out.

I can also operate fairly well on no sleep, and I learned how to fall asleep anywhere, in almost any circumstances, because you never knew when your next available nap was coming, so that’s cool. But I have to say that one of my more favorite college skills is how to power through a migraine. They used to lay me out flat, but thanks to college I just wait them out. I can’t even try to sleep them off anymore, because I just get annoyed. I’ve had a migraine since 8 p.m. Nearly 3 hours later, I actually feel pretty OK. Honestly, the biggest problem I have now is nausea, and plenty of fresh cool air can calm that right down. A quick drive down the freeway with the vents open and the back windows cracked and I’m ready to blog and everything. Thanks college! 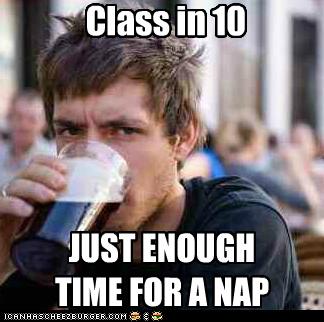 See more on Know Your Meme

UPDATE: So it’s 6:30 am, and I’ve been powering through this migraine all night. As evidenced by this update, I’m still kicking, but even a super badass like myself has limits. I may stay home from work today and experiment with self trepanation. I’ll keep you posted.