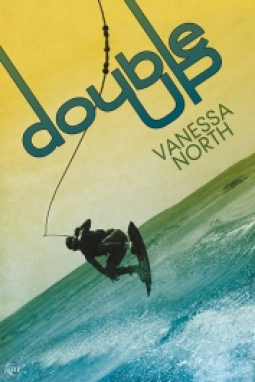 Double Up by Vanessa North

Thanks to Netgalley for the review copy. Double Up is available for purchase on Aug. 25, 2014

Like I said in the last post, I am enamored of Riptide. Their books are good, no matter which way you cut it.

This gem falls strongly in the “which way” section of the cut. For one, the entire thing is written in first person present. For an idea of what that’s like, check this sample right here.

I am writing a review of Double Up by Vanessa North, I type away at my keyboard while the movie Flight plays quietly in the other window. In a couple of minutes Ben will call me to do the dishes for our upcoming dinner. At that point, I’ll be standing at my kitchen window listening to an audiobook while I scrub the pots and pans.

[Editor’s note: this is actually really hard. Plus half a star for difficulty.]

Now imagine an entire book exactly like that. It was crazy making. Although it did make the sex scenes hotter than normal. You really feel like you’re in the action with first person present.

The story itself starts out like an abusive relationship red flag check list. The main character has low self esteem, he at seems to be isolated without much in his life to hold on to. The love interest is described as out of his league, he is controlling, moody and punishes the main character by withdrawing his affections when he feels he’s been disobeyed.

Eventually he comes around to the idea that you can’t control the ones you love, and that people’s actions and their choices are theirs to make, seemingly out of the blue and everybody lives happily ever after. Main character even comes up with some friends and community standing at the end, making him seem like way less of a sad-sack charity case.

Ultimately it’s cute and positive and the plot moves crazy fast. Not a bad way to spend an afternoon. You know, after you get over the first person present. That is some distracting, tiring shit.