So the other day fellow podcast fan and twitter friend Grus posted about his Graze snack pack on twitter, and I thought to myself ‘I like snacks.’ So I clicked the link and I learned, much to my joy, that thanks to Grus’s code, my first and fifth graze boxes were free, and the others were $5 each.

They have two box options (lite and regular), each with four snacks in them. I got the regular box, which is still pretty low cal compared to some other snacks a person might encounter, say in their local vending machine. After that I went through the site and rated what I thought I might like to receive from Graze. They have a multitude of snacks to choose from, they’re all labeled with helpful icons to determine which are low cal, high fiber, packed with vitamins and so on. Then I waited. I was expecting the first box around Monday or Tuesday, but I wasn’t really sure when it was supposed to come. Wednesday morning I got an email from Graze that some of the boxes were taking a little bit of time to show up. Ten minutes later: Graze box on my desk. 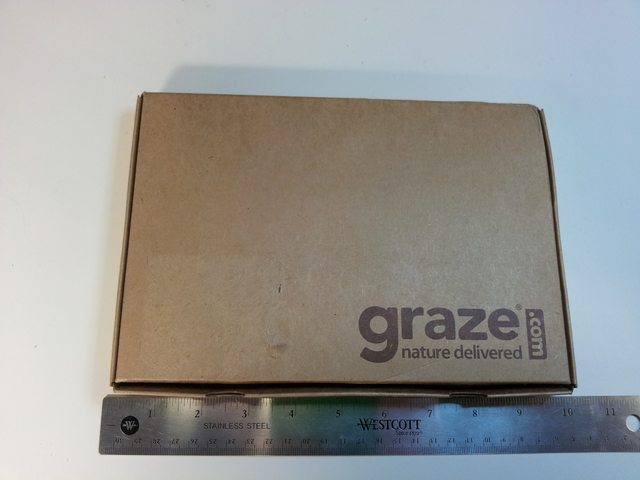 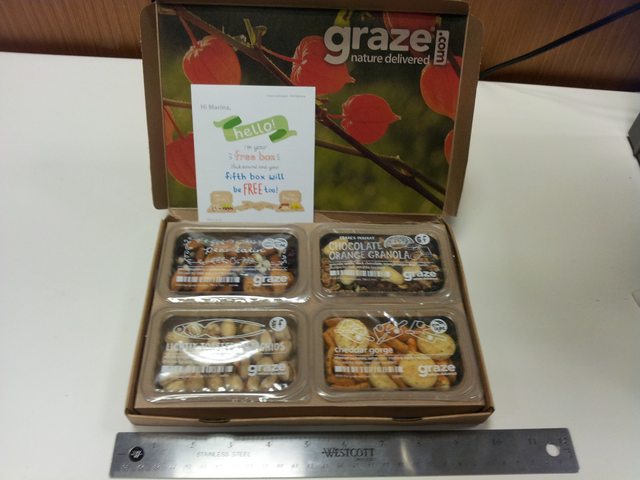 So far, I have received two boxes from Graze, both on Wednesday. I liked everything in the box, and unlike the high sugar/high carb snacks I might have otherwise eaten, graze snacks didn’t leave me hungry again after a few minutes. Everything tastes extremely fresh. My only complaint about graze is that I can’t buy more of it. I wish I could order larger bags of my favorites, but then if I did that, I wouldn’t get to taste new things every week, and half the fun is ripping the box open to see what I got. I’m definitely a fan. Although I should say that if you happen to be a picky eater, or allergic to nuts, Graze probably isn’t for you. While you can rate the things you like, and trash the things you never want to get, there isn’t much ability to pick what comes. They are extremely vegetarian and vegan friendly, so that’s a plus.

They’re doing a limited release, so you have to be invited to join from someone already enrolled. Fortunately for you guys, I happen to have a code. The first four people to go to Graze and enter the code H177KTM will get their first box free. This isn’t a deal I’m doing with them or anything. Every graze customer gets the same option. They auto-charge every week, but the boxes can be pushed back or cancelled at any time, even after the free box. I encourage people who get graze and like it to share their coupon code in the comments if they don’t have anybody else in mind for it so we can keep this thing going as long as we can.