When I was a little kid, I lived with my grandma and grandpa, the latter of whom was completely insane. In addition to talking to himself in a voice that is not his own, dominating every evening with hours long diatribes on the government, and his bosses, and the moronic population of this entirely doomed and desolate planet, he also couldn’t stand people who walked on paths that he had already walked on, or that he might walk on in the future. He also hit me, but supposedly sane men hit their kids all the time, and we’re talking about imaginary walking paths right now.

So navigating my house was kind of an interesting experiment in terror. For those of us who were unable to discern the paths of the future, or remember the paths of the past, every square foot of floor was contested. Of course, a smart person could generally do better than chance by drawing a straight line from any one point to any other point in the house and avoiding that section and about 3 feet on either side of it. Couch to fridge, fridge to liquor collection (because who has time for cabinets when your life sucks this much?) , liquor collection to bathroom, and so on. The only time this plan completely backfired is in doorways. A doorway is only about 2 and a half feet across, there’s really no way for a person to not tread on the same path as another person in this instance.

It’s funny how things seem to follow you. To this day, I have substantial doorway anxiety. I mean, I can walk through a door-way, I’m not that impaired, but when one or more people are near the doorway, the number of people and the proximity to the doorway have a direct impact on my anxiety. And that’s when the weird shit happens.

Anybody who’s walked with me might notice that I tend to try to open all the doors. More probably, they noticed my tendency to LEAP through doors opened by other people, even when it’s clear they weren’t opening that door for me, but for themselves, and any logical person would not just go around leaping through things, especially when leaping is not expected. I do this because the sensation of being near a doorway and also near another human being at the same time is terrifying to me, and as I’ve always been a “rip the band-aid off” type of girl, I generally make a mad dash for freedom, and fuck everything else. Anxiety trends to make one stupid, and even though I feel completely ridiculous as soon I’m clear of the spatial conflict that is an uncrossed threshold, I never acknowledge the insanity of my actions. Although sometimes I shrug when people stare at me like a freak, but that’s a standard response.

You’d think that after a lifetime of doors and doorways stretched out behind me, my anxiety would lessen over time, but I think it’s moving backwards. The office I work in has several doors, doorways, and hallways with adjoining doors to get supremely anxious about, and I think that the collective uncertainty of all those converging paths is getting to my brain. I’m going to have to start doing breathing exercises or something, because a person can’t go on leaping in front of her co-workers in order to alleviate her own stress while leaving them standing, befuddled, one hand on the door while I shrug.

When I Googled ‘holding the door,’ this came up: 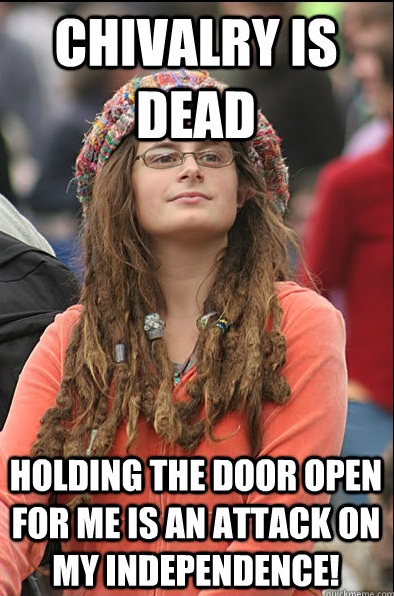 Good. Chivalry should die. Chivalry in the old sense of being a code of conduct for how a man must treat a woman on account of her extreme incompetence was, at best, a booby prize for second class citizenship. I’ll gladly give up every one of those ‘advantages’ (which, lets face it, as an ugly girl I didn’t get any of in the first place) for true equality (starting with pay, please!)